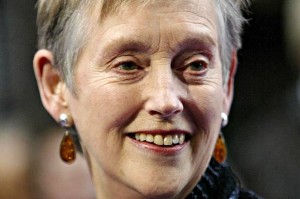 At the height of the Cold War we heard that Dame Stella received an unexpected tap on the shoulder whilst she was working as a librarian in India, which led to a long and distinguished career in MI5! Starting as a part time secretary in Dehli, Stella worked her way right to the top of the organisation becoming the first woman Director General in 1992.

In breaking through this glass ceiling Dame Stella told us about a sea change in working conditions and attitudes towards women working in counter espionage and counter terrorism. She credits her success to the use of quiet persuasion, charm and patience.  However, she also encountered less welcome attention from the tabloids who dubbed her the “Housewife Superspy” when her appointment as DG was made public. One journalist wrote that she had very large ears which must be very useful for undertaking covert surveillance!

But importantly this heralded a change in the image of the service and set the foundation  for increased openness that continues today.

After retiring in 1997, Dame Stella didn’t rest on her laurels writing a best selling autobiography Open Secret and fulfilling her dream of rescuing spy stories from the blokes by writing novels about female spy Liz Carlyle who does things properly.

When talking about how women can rise to the top of their profession Dame Stella emphasised the importance of networking and subtle observation, charm and patience. She also advised Soroptimists to recruit “agents of influence ” to support our cause. Wise words indeed!