Each Assistant Programme Director invited one Club to present their work on a project that illustrated their programme area.  The following Clubs made presentations:

Each year, SI Richmond and Dales give three placement students a head start in the skills required to run an organisation so that as they will go forward into their careers they will be confident in their understanding of many situations e.g. formal meetings and committees. The girls attend Club and Club Executive meetings for 18 months and have access to a support group to discuss their learning needs and handling of issues.  The feedback from the Placements is very positive. 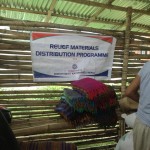 They also presented some health workshops and this year Nepal has been selected as the focus of Soroptimist International President Yvonne Simpson’s Appeal for 2015-2017.

SI Wales South presented on their Region-wide project “Anti Human Trafficking/Modern Day Slavery”.  For the past two years, SI Wales South have raised awareness on Modern Day Slavery in the country.  Clubs in South Wales have embraced the project and organised the UN Gift Box as well as holding conferences on the subject.  SI Wales South held a symposium in February 2015 attended by immigration, Save the Children and many other Organisations. 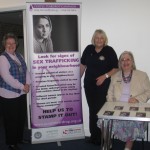 SI Poole have been running the Purple Teardrop campaign since 2008, during which many resources have been produced, including posters and bookmarks, to get the message across about Human Trafficking, and give the Helpline phone number to ring.

Sex trafficking promotes societal breakdown by removing women and girls from their families and communities. Trafficking fuels organized crime groups that usually participate in many other illegal activities, including drug and weapons trafficking and money laundering. It negatively impacts local and national labour markets, due to the loss of human resources.

SI Downpatrick and District produced a leaflet on Climate Change, which they launched at a public meeting hosted by the Mayor of Downpatrick District Council.  The leaflet was distributed to the local council, all local schools, libraries and community centres to raise public awareness of climate change and what individuals can do to prevent it.

SI Barry and District partnered with KIVA, an American non-profit making organisation which uses the internet and a worldwide network of microfinance institutions to facilitate loans, in order to provide loans to people in some of the poorest countries to develop businesses, gain academic qualifications, improve sanitation and access clean energy etc.Loans of over $600,500,000 have been provided.  Examples of loans provided are: to allow a woman with a food stall in Vietnam to buy a greater variety of stock; to enable a woman in Uganda to expand her poultry business, and to enable a woman in Nicaragua to take a degree in Public Accounting.  In every case the loans have been steadily repaid and the money reinvested in other businesses.