Skip links
﻿
Our new Soroptimist Statue was officially unveiled at the National Memorial Arboretum on 18th September. At last Soroptimists from all over Great Britain and Ireland were going to see the statue representing our organisation, and also to celebrate 100 Years of Soroptimism.
The weather was kind to us and as we gathered in Heroes Square it was wonderful to see ladies from throughout the federation coming in. Four members of Tamworth Club did us proud by all wearing SI blue T-Shirts and fleeces; they soon had the job of directing sister Soroptimists to the SI Plot. 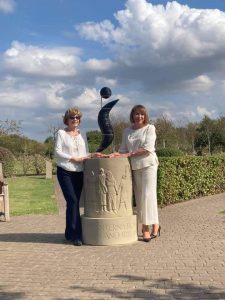 SIGBI President Cathy Cotteridge was there to perform the unveiling accompanied by SIGBI Past President Isobel Smith who initiated the proposal for a statue. Past Presidents Ann Garvie and Maureen Maguire were in great spirits at the turnout – 81 members attended in all.
Cathy’s speech emphasised that the plot belongs to SIGBI who have put aside £5,000 to cover the continued maintenance of the statue and thanked all three midland region clubs for their past care of the plot. The cylindrical base is marble and depicts soroptimists of all nations holding hands and facing outwards. The crystal ‘S’ sparkles blue in sunlight and darker in shade. The other three plinths have also been replaced with matching marble and a fresh bench has been added near the statue.
Isobel and her team were heartily thanked for their hard work towards achieving the finished result and incoming Soroptimist International President Maureen gave a stirring speech of the future for Soroptimism with her SI President’s Appeal 2021-2023 – OPENING DOORS TO A BRIGHT FUTURE!
Countless photographs were then taken by Steve the official photographer so that everyone present was invited to be pictured with the statue, with their club, friends and region and many more combinations too. These photographs can be bought from the SIGBI Website.
Most people stayed for afternoon tea in the Arboretum’s palatial Conference Room where there was time to meet and greet others. We had a brief slideshow from President Cathy who certainly enjoyed the welcome she received from Midland Chase members. It was a euphoric occasion and the sunshine served to round off what was a terrifically successful event.
Margaret Clarke
September 2021