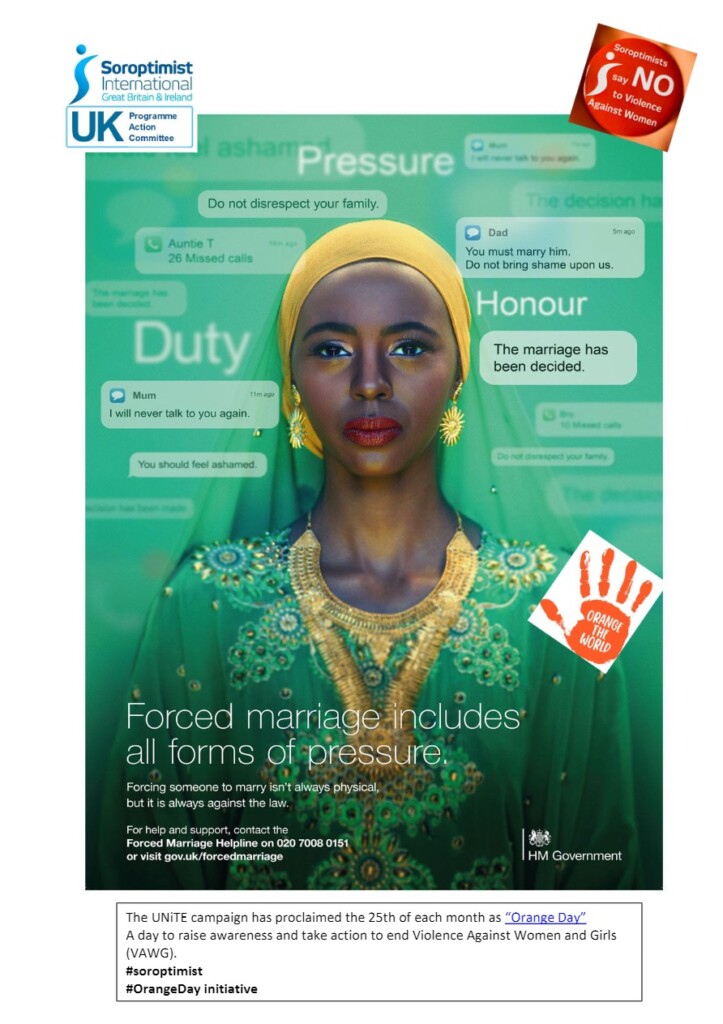 Today on August 25th 2022 Soroptimists in the UK are wearing orange to draw attention to the practice of Forced Marriage, which is recognised as a form of Modern – Day Slavery.

What is Forced Marriage?

Forced marriage is when one or both people do not or cannot consent to the marriage, and pressure or abuse is used to force them into marriage.

Forced marriage is illegal in the UK. It is a form of domestic abuse and a serious abuse of an individual’s human rights.

The International Labour Organisation (ILO)estimates that 15.4 million people around the world are in situations of forced marriages and it is estimated that 84% of these are women and girls. There are three main types of forced marriage:

There are numerous reasons why forced marriages occur, payment of a bride price, to cancel a debt, to secure the residency of an individual in another country, deception etc. Once the marriage is entered into then the risk of further abuse and exploitation increases with the likelihood of domestic servitude and forced labour and sexual exploitation being a possible outcome for the individual.

The ILO estimates that 37% of those living in forced marriages were children at the time of their marriage with 44% under the age of 15. Obviously, marriage at such a young age, impacts on the life of a child, educationally, socially and with grave potential health problems due to sexual activity and possible early pregnancies.

The UN Office on Drugs and Crime estimate that 1.4% of known victims of human trafficking are trafficked for marriage.  Women are abducted or lured by false promises into marriages abroad, or are sold by family members, often due to poverty. These women might be confined, raped, and abused until they consent to the marriage.

The link between forced marriage and modern – day slavery is clear and ending these marriages would help in the fight against both human trafficking and modern- day slavery.

Club Home
Club Programme of meetings and events
News
SI MK Newsletter
Charities
Who are we
SI: MK celebrating 100 years of Soroptimism
June 2020 is our 5th Birthday – what have we done so far
Privacy Policy
Projects/Activities
Club Friendship Links
Gallery
Looking for help?
Contact Us