The year started with members placing boxes in various establishments in and around Neath where a collection was made and the money was used to purchase toilets. During the month of May, which was membership month, Catherine and her membership team also made a collection in the Gwyn Hall on their raising awareness day.

To mark the 150th Anniversary of St David’s Church Neath at the end of September, instead of a flower display for the festival we decided on the Meru Women’s Garden Project as our display. Several members were involved in building a garden in the church which was admired by many people and organisations who came to the festival and some people gave donations towards the project. There was a lot of interest and it was a huge success. It also raised awareness of Soroptimism. The club will be visiting the Sennedd in May to raise awareness of Soroptimism and the Meru Garden Project.

On 25th November a donation of 36 packets of ladies briefs, 8 loose briefs and 150 Bras were sent to Smalls for all. These will be sent to women in Africa who need them. A small donation of bras were also donated to Singleton Hospital.

Clothes for the homeless

International night saw us make a collection of old clothes. We collected 24 bags which were passed on to the Paxton Street Hostel where the clothes were very much appreciated.

In January, Club members got involved with ‘The Big Knit’ where 180 hats were made and sent to Age Cymru. These hats will be placed on Smoothie bottles and for each bottle sold, 25p will be donated to Age Cymru. 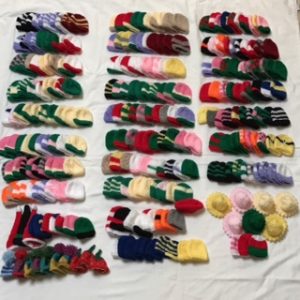 Badges from SI Canterbury to support the Meru Garden Project

Several members of the club purchased badges from SI Canterbury to support the Meru Garden Project.

A curry night was held in Panshees in January. 22 members, family and friends attended and a total of £168 was raised.

An audit has been carried out of items the club already has for Mary’s Meals. We are in the process of collecting any missing items in order to assemble the rucksacks.