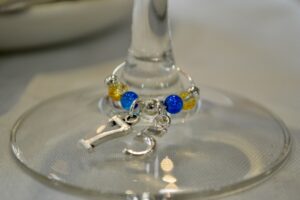 Renfrewshire Council honoured the Club with a civic reception to mark 75 years of service locally, nationally and internationally with a lunch on 12 June 2022.  Members past and present were joined by the Depute Provost Cathy McEwan, President of Soroptimist International of Great Britain and Ireland, Cathy Cottridge and  others to mark this special occasion.

2020 is the 75th anniversary of the founding of Soroptimist International (S.I.) of Paisley. The inaugural meeting of the club took place on 14 November 1945 and it was formally chartered at the first annual dinner held on 18 February 1946.

Established by Mrs Annette Muir, a Paisley buddy and wife of a Paisley weaving mill owner, who was a member of S.I.Glasgow Central (now part of S.I.Glasgow City) there were 28 founding members. She was helped in establishing the club by Miss Catherine Lobnitz, from a local shipbuilding family, who later became the first honorary member. Founding members included a pharmacist, police officer, bookseller, various teachers and a solo pianist.

The President’s chain of office was presented to the club by Mrs Muir and her husband. It contained a central medallion which was designed by well-known local architect James Steel Maitland, who designed the Russell Institute and many other Paisley buildings.  In 2019, a new chain was commissioned with links in the shape of the Paisley Teardrop but still with the medallion attached.

This active band of ladies then set about establishing themselves as part of the community in Paisley and the surrounding area.

Over the 75 years of its existence, many ladies have been members – some for long periods of service, others only briefly, but all getting involved and using their individual skills and experience in a wide range of fundraising activities, providing practical help and support, and working to raise awareness of issues of particular concern to women.

Along the way, members helped establish three ‘daughter’ clubs in Greenock, Hamilton and Kirkintilloch. Sadly Greenock  closed a few years ago. One member was also involved in the establishment of a club in Alicante when she retired there in 1974.

A number of Friendship links were made over the years with other clubs in Harrogate, Laguna Beach and Alameda in California and Sion in Switzerland. Although the others are no longer in place, the link with Harrogate is still going strong after 40 years and a new friendship link has been established in recent years with S.I.Kathmandu.

75 years of activity including fundraising, has seen members involved in a wide range of things, of which only a few can be mentioned here.

1948 saw members getting involved with Paisley and District Hospital Voluntary Services Association and the adoption by the club of the Peesweep sanatorium on the Gleniffer Braes, visiting and supporting the patients until it closed in 1959.

Also in 1948, recognising there were many elderly ladies in need of companionship, a club was established for ladies over 70 who were living alone in the community. The ‘Over 70 Club’ met one afternoon a week until 1970, supported and ‘staffed’ by Soroptimists who provided warmth, company and a range of activities.

The early 8o’s saw the Club involved in the establishment of a local hospice – ACCORD, and in the late 80’s providing funds and knitted items for orphans supported by the Simona Trust in Romania.

Significant funds have been raised over the life of the Club, and  used to help the work of many groups and organisations including:

Practical help has been provided in many ways including through

Advocacy and raising awareness – members have been involved in a range of issues. This has included

The club has also supported a number of international projects where Soroptimists across the globe work together on a specific project. These included

The type and nature of the work carried out has changed but the ethos behind it remains the same today as when the club first started – a desire to make a difference to the lives of women and girls.

Throughout the life of the club there has also been a lot of fun and friendship as well as hard work. Many members have made life-long friends, held office at higher levels within the organisation and travelled widely to Soroptimist events across the globe.

As we move into our 76th year, the members are as active and committed as ever to making a difference for women and girls locally, nationally and internationally.