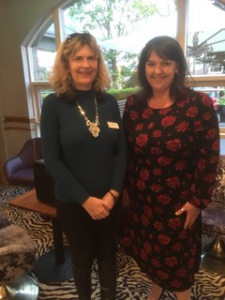 At a recent meeting Marianne, Refuge Support Worker, Renfrewshire Women’s Aid, raised our awareness of the new legislation, Domestic Abuse Scotland Act Jan 2019, which now replaces Legislation that was 20 years old and recognises Coercive Abuse as well as Physical and Sexual Abuse. It also allows for the charge of Domestic Violence to be made rather than GBH or Breach of The Peace. Children are now also recognised as experiencing Domestic Abuse in this whole situation. The new Legislation captures the lived in experience of women experiencing Domestic Abuse and is expected to make a huge difference to the lives of women who are being abused.

With the war in Syria featuring on our TV screens nightly, members of S.I.Paisley were very interested to hear from Alison Millar, Refugee Resettlement Co-ordinator for Renfrewshire Council about her work with Syrian refugees.

Her talk gave us some insight into what it is like to be a refugee, a situation in which none of those present could really imagine finding themselves. 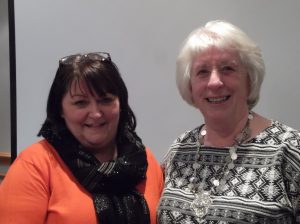 These topics were linked through two very different but stimulating speakers.

Entrepreneur, Poonam Gupta, an enthusiastic and positive young woman, talked to members about how she had built a business from scratch after coming from India to live in Scotland.

She strongly believes that women should have economic independence, make the most of their education and be ambitious.  Having built a successful international business, she now mentors other women who are looking for help as well as working with and supporting a number of charities providing support for women and children.

We then moved from the world of work to the world of international travel, when Vivienne Macdonald from Beith entertained and informed us with images from her travels – there is hardly a country in the world that she has not been to.  Using amazing photos, she took us from the west coast of Scotland with its stunning scenery to Iran, a fascinating country with astonishing buildings, via the Victoria Falls in Zambia.

Members raised £300 in January towards the recently launched International Appeal which will support projects that educate, empower and enable women and girls ensuring they have the capacity, experience and education needed to manage water resources and gain careers in water related professions.  The funds were raised by a silent auction when members contributed unwanted gifts and other items, then enjoyed bidding against each other for the items they wanted!

By uniting the four Soroptimist Federations, the President’s Appeal hopes to reach the goal of raising £350,000 over two years, and to have improved, sustainable, accessible and affordable water products and services on five continents.

The first project to be supported is ‘Improving access to agricultural information, clean energy and water to achieve better food security for 500 women farmers in Kenya, Africa’.

Through training and capacity building, the women will be exposed to better and modern farming structures, helping them move on from subsistence farming – growing crops and raising livestock sufficient only for one’s own use – to commercial farming, and will be supported throughout the transition.

I believe in Love even when it is not given

I believe in God even though his voice is silent “