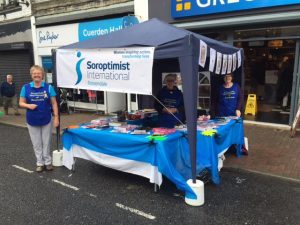 Despite the chilly weather at the start of the day 4 September 2016 turned out to be another successful Aces and Faces Day!

SI Rossendale are pleased to have been part of the annual Haslingden Street Fair for the second year running, and a successful day it was. Our Aces and Faces game raised £220 for our club charity funds.

Thank you to everybody who contributed. See you next year!!