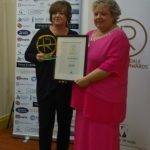 We were delighted to attend the Rossendale Business Awards this week to present the 2016 Enterprising Woman Award. Rossendale Soroptimists sponsored this award to recognise strong, independent, confident female leaders who have developed an approach that has brought educational or leadership opportunities for other women. We were delighted with the huge interest in this inaugural award. The judging was made very difficult by the quality of the nominations.

President Alison Driver, pictured presenting Christine with her award, said “I’d like to thank all the women who took the time and trouble to enter for this award. It wasn’t an easy task choosing between such high quality, worthy applications. Christine was chosen in recognition of her long record of training and developing her female employees to enable them to achieve their potential and for using charitable fundraising as a means to develop a supportive, inclusive working environment”.

Christine, who said that receiving the award was “a complete surprise” will be offered one year’s honorary membership of SI Rossendale and in the New Year will share with the club the story of her business and personal achievements.