May 2018 marked a great milestone for SI Rossendale, because it was the 70th anniversary of Soroptimism in the Rossendale Valley.

To celebrate, we held a big birthday party bash at The Sykeside Hotel in Haslingden, and invited our friends and beneficiaries along to help with the revelries.

In fact, we even managed to get our event in the local paper – The Rossendale Free Press! Below is the transcript of the article.

Founded in 1921, Soroptimist International is a worldwide organisation dedicated to the empowerment and advancement of women around the globe. The Valley’s local group, SI Rossendale, is this year celebrating 70 years of Soroptimism in the Rossendale Valley. The first group, SI Rawtenstall, was inaugurated in 1948 and there have been Soroptimist groups in the local areas ever since. 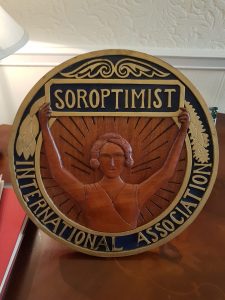 The birthday bash was held at the charming Sykeside Country House Hotel in Haslingden. The event comprised a luxurious afternoon tea and was attended by the members of SI Rossendale, along with the Regional President, Maureen Howarth, and Federation President, Sue Biggs, of Soroptimists International. Also in attendance were the Deputy Mayor of Rossendale, Anne Kenyon, and representatives of some of the main local charities that have benefitted from the work of this charitable organisation over the past 70 years.

Organised by SI Rossendale themselves, the afternoon’s proceedings were headed by Alison Driver, the outgoing President of SI Rossendale. After an afternoon tea made up of deli-style sandwiches and homemade cakes and desserts, the honoured guests were invited to speak about how the work of SI Rossendale had benefitted their charity.

Amongst those invited to contribute were Kate Crane of Wonderful Things, who spoke warmly about how SI Rossendale has helped to support their Wonderful Women project, by offering valuable mentoring support to young girls trying to navigate the often-difficult mix of schools, careers and growing up. Nick Subasic of the Alder Grange Breakfast Club similarly spoke of how SI Rossendale have supported the work of this valued service, which offers a free substantial breakfast to youngsters who might otherwise be starting the school day without any nourishment inside them. 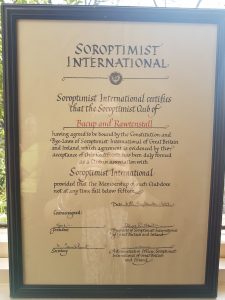 Another much appreciated speaker was Lyn Haworth of the M3 Project, one of Rossendale’s most prominent charities, offering housing and other practical support to young people at risk of homelessness in the Valley. Lyn expressed the charity’s gratitude for the years of support SI Rossendale has given the M3 Project and explained why their continued support is still very much needed.

Christine Durkin from the Rossendale Hospice was another guest who expressed their heartfelt thanks for the work of the Soroptimists, reminding attendees that the founding of the hospice was thanks to an idea that originated with the Haslingden Soroptimists, as well as relaying the gratitude of both the staff and patients of the hospice for the continued support of the organisation.

In addition to the guests attending to thank SI Rossendale for their many decades of charitable work, there were also several dignitaries in attendance, including Councillor Anne Kenyon, the Deputy Mayor of Rossendale, who spoke to thank the group for their tireless work to improve and promote Rossendale as a whole, and the women of Rossendale in particular. 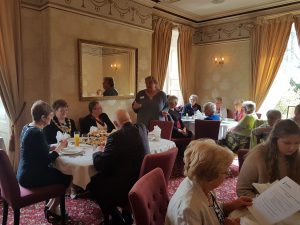 The Federation President of Soroptimists International (SIGBI), Sue Biggs, along with the Regional President, Maureen Howarth, also both attended the event, and spoke of their pride that SI Rossendale was able to celebrate the significant milestone of 70 years of Soroptimism in the Valley, as well as their gratitude for the hard work and dedication displayed by the Soroptimist women.

In honour of this long service, Sheila Whipp was asked to cut the cake, along with the newest member of SI Rossendale, Rachel Weinhold. The cake itself, a large number 70 in the colours of Soroptimism, was made by Rossendale schoolgirl Grace Mellors, whose confectionary creations have wowed in the past. As ever, Grace did a wonderful job of the cake, which tasted as good as it looked. 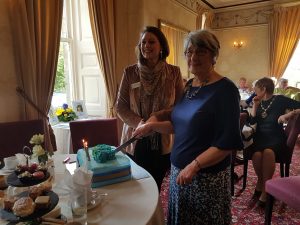 Speaking of the event afterwards, Alison Driver, the President of SI Rossendale, said;

“We have had an absolutely wonderful day. It’s been so nice to get the whole group together and celebrate 70 years of Soroptimism in the Valley, and to meet the charities and hear how we’ve helped them just makes all the fundraising and profile raising seem more rewarding. I am so proud of everything the Rossendale Soroptimists have achieved, here’s to another 70 years!”