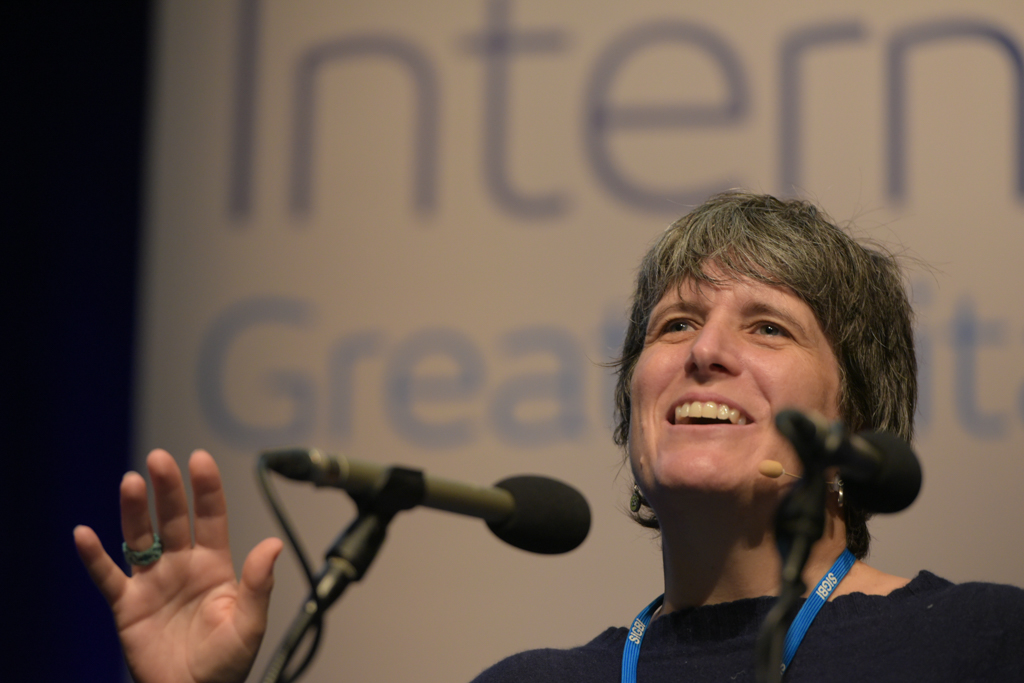 Well – what an opening speaker for us here in Belfast this morning – Elizabeth Gowing.

Elizabeth worked as a teacher, lecturer and education consultant before moving to Kosovo with her partner in 2006.

Delegates couldn’t help but be enthralled as Elizabeth told us how, after 4 years living in Kosovo and learning Albanian – the local language she found herself working with the Roma-Ashkali community after the fortuitous meeting of a 9-year-old girl called Gjelane, wearing mens shoes (the only ones available to her) and her father. The income from this family derived from scouring skips and rubbish bins and black bags to extract plastic to take to a recycling depot in return for a meagre payment of just a couple of euros a day.

As an educator Elizabeth’s natural instinct was to ask why both Gjelane and her brothers were not in school (education is compulsory in Kosovo at this age) – the response was simple from her brothers: They had no shoes of their own. Despite her scepticism – true to their word the day after the boys got their shoes from Elizabeth they were in school. The story for Gjelane was different, more complicated and was the start of the journey which has led to Elizabeth Gowing setting up The Ideas Project and being given citizenship and more recently she has been asked by the Prime Minister of Kosovo to be a member of his cabinet.

Gjelane explained that she was unable to go to school as she could not take the entrance test as she could not read and write – a fact confirmed by the relevant bureaucrats who deemed the children within the community ‘unteachable’. Elizabeth realised she had to do something: she offered to help Gjelane pass the tests she needed to get into school. But what Elizabeth wasn’t expecting was this 9-year-old asking if her friends could join her.

After renting a room in a corner shop – the numbers went from 23 children on the first day to 50 at the end of the first week! 6 months later – on September 1st, 61 pupils attended their very first day of school thanks to Elizabeth and a handful of volunteers.

Gjelane is the first of 4 women’s stories she shared with us today.

The second was Gjelane’s mother – Hatemja. Education is free in Kosovo – however the opportunity cost by having less hands to search for plastic had a huge impact on the family’s income. Hatemja was shown how to make and sell soap, along with 5 other women and these small businesses meant that the families concerned were in a much better economical position and their children could stay in school.

The soaps needed packaging and the UK Government provided a grant to buy sewing machines allowing another 9 women to be involved in the project from neighbouring communities – providing a sense of agency amongst them.

An impact assessment showed that the larger benefit of this project was not economic – but that these women had become agents of change within their immediate communities.

The next story belongs to Arlinda. A single mother of 5 following the death of her husband from Covid-19. Arlinda told Elizabeth that she too wanted to learn how to read and write – despite being 28.

Elizabeth explained that with courage and self-drive Arlinda not only achieved her literacy goal but continued to set up her own business with a sewing machine making reusable masks for those members of the community – searching the skips and bins for plastic – who were more at risk of catching Covid.

Incredibly, within such a short period of time Arlinda went from not being able to read to being voted the EU Woman of the Year…what an achievement.

Early marriage – ( the legal age of 18 ) is very common within communities in Kosovo. This creates both a health and educational risk to the girls… some as young as 13 years of age. A house-to-house survey showed that two thirds of girls were married under the legal age of 18 and one third under the age of 16.

Remzije with Elizabeth’s support creates a group of young social/humanitarian workers called ‘Little Social Workers’. This group led by Remzije provided support and help to the young people with their communities, breaking stereotypes and inspiring the young women to take control of their lives.

So what next? As well as an active Cabinet member of the Kosovo Government, Elizabeth continues with the ideas Partnership and is 526 days in to completing a new education/community hub.

The journey started with a request from one 9-year-old girl asking if her friends could join her in being taught to read and write and is currently a building project employing 185 local men in its construction, with full support from the country’s prime minister and president. The Education Centre is due to open on the 15th November.

It is impossible within this short blog to convey the energy, inspiration and impact that Elizabeth Gowing had on the delegates this morning. Her overriding message was to help people in need help each other and she provided the quote from Maya Angelou: “When you learn, teach. When you get, give.”

When you’re given an opportunity, pass on this opportunity to others – create agents for change, and where better to do this than with the young women and girls.

And isn’t this just what we as Soroptimists aim to do?