On 25th November Soroptomists from throughout the southwest joined the SI Weston-Super-Mare Club in their initiative to raise awareness and support the United Nations “Day for the Elimination of Violence Against Women”.

Soroptomists from Barnstable, Bath, Bridgewater, Cirencester, Plymouth, Swindon, Taunton, Tiverton and Western-Super-Mare travelled by train (“railing”) to Bristol Temple Meads station to join members of the Bristol Club. Most were adorned in distinctive orange clothing (including wigs). The main group walked, in a very orderly fashion, with banners and a loudhailer from Temple Meads Station to the Lord Mayor’s Chapel at the bottom of Park Street. A small group, including Tara Arkle, took the bus to C 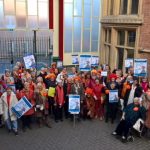 During their “railing”, Soroptimists distributed “Loves me /Loves me not” bookmarks and cards to other passengers. This publicity material has been carefully produced to define in clear and simple terms the difference between good and bad relationships. During the walk, bookmarks and cards were enthusiastically given to members of the public.

The group congregated by the Christmas tree on College Green, where they were joined by the Lord Mayor, Tara Arkle and her mother, Dame Joan Collins. Everyone walked to the Lord Mayor’s Chapel to hear short presentations by the following people: 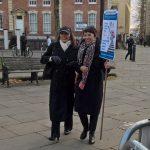 – Lord Mayor, Councillor Lesley Alexander
– Police and Crime Commissioner for Avon and Somerset, Sue Mountstevens
– Victim Support charity, Jodi Collett
– North Somerset Support Agencies, Tara Arkle
– Main speaker, Dame Joan Collins
The message they presented was consistent and while alarming in the scope, frequency, and types of abuse was encouraging that the problem is being addressed.
Following the talks, everyone enjoyed a scrumptious buffet lunch provided by SI Western-Super-Mare, SI Bristol, and Tara. The event was covered by TV and radio stations and was the lead story on Points West.