This was the 83rd Federation Conference held at the Wales Millennium Centre, Cardiff from the 26-28 October 2017. Nine members of SI Bristol attended for some or all of the time which was excellent and these are a few highlights relating to SI Bristol at the conference (for the full report see SIGB website www.sigbi.org). 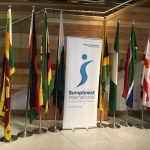 The Opening Ceremony, paraded the flags from the countries represented by SIGBI, the Soroptimist International flag and the United Nations flag. SI Bristol had a mention right at the beginning as being the first formed Club in the UK. 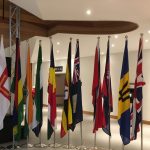 Friday morning the programme began proper with the first keynote speaker, Michael Kaufman, who co-founded the White Ribbon Campaign. Following his presentation, four Clubs showcased what they had done over the past year which related to Violence Against Women. We were very pleased that this year SI Bristol was invited to present their “Off the Record” project (see Club Charity 2016/17) President Pauline and Lizzie did the presentation. 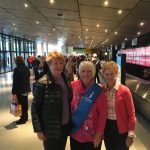 Coffee and lunch times at Conference are good times to catch up with Friendship Links and we met members from SI Halifax and SI Croydon. Unfortunately we missed SI Bootle.

Whilst walking around the Conference Exhibition, Lynn, Sue and Pat stopped at the Landmine Free 2025 stall. 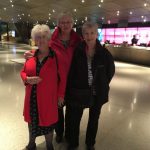 They completed a form with a message from SI Bristol which will be displayed on the side of a building in Vienna during December. The message read: “SI Bristol condemns the evil of Land Mines”

On Saturday three of our Club members helped with stewarding – not an onerous task but rather good that we could help seeing that Bristol is so close to Cardiff. The final keynote speaker was Dame Katherine Grainger as she told of her experiences in rowing to Olympic Gold medal standards. The Conference ended with the changes of insignia and an inaugural address by the incoming Federation President for 2017-2018, Susan Biggs. Next year the 84th Conference will be in Liverpool.