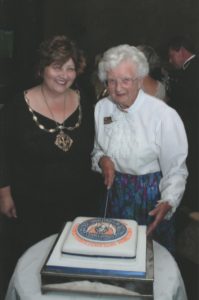 A Tribute by  Susan Greenwood on behalf of the Club

It is with sadness, affection and respect that we report the death of our only Honorary member Margaret Skerrett. She died peacefully in hospital on 12th June after a short illness at the age of 95.

Margaret, as Miss M. Holgate, joined S I Bristol in 1958 in the days when most members wore hats and gloves to meetings, smoking was the norm, with ashtrays provided, and members addressed each other formally. Most of the members at that time were in full employment, and when they reached retirement age they might be invited to stay on only if they were thought to be useful! Margaret enjoyed the aims and projects of the Club although at first found the formality quite daunting.

(above) Margaret is cutting the cake at our 90th anniversary in 2011.

Her category was Horticultural Statistician, working at the Long Ashton Research station where she met her future husband Professor John Skerrett. They married in 1988 and enjoyed an active life together, sharing many common interests. Sadly John died of cancer in 1994.

Within the Soroptimist club Margaret avoided taking office as she always felt herself to be a “back room person”. However she willingly took an active part in club, visiting our various projects, working on committees and on reception, loyally supporting SI Bristol and attending meetings even in the last few months of her life.

She was a gentle person, kind, thoughtful, always smartly dressed -anxious to be no trouble, a true lady who nevertheless was active and determined, taking her almost daily exercise even during lockdown, despite a number of falls in the last few years.

Margaret took a great delight in her Family watching her nephews and nieces grow up. We send to her Family our very sincere sympathy, and we will all greatly miss such a kind and gentle friend and member at our meetings.