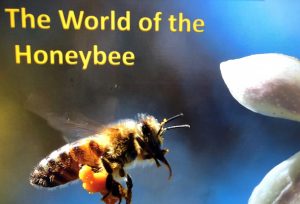 Annabel has been a bee keeper for 10 years and is Chair of North Somerset Bee Keepers.  Annabel started by describing the privilege of being a bee keeper.

Relationship between the honeybee and the flower: She described the relationship between the honeybee and the flower which has evolved over many years. With wind pollination you need a lot of wind and so nature has devised its own way to pollinate.  Flowers communicate with the bees and bees communicate with the flowers.  She showed us the flowers in ultra-violate light.  The entries to the flowers showed as dark with nectar guides guiding the bees to their centre.  They also communicate electrostatically and the honeybee is drawn to the plant because of this.  The pollen lands on the honeybee and it carries the pollen on its back legs.  As it moves to the next flower it deposits the nectar there.  Her tongue acts as a straw and sucks up the nectar into her honey stomach taking it back to the hive and turning it into honey.

How do bees know where to go? They do the “Waggle Dance”: They send scout bees out from the hive to flowers like the blackberry flower (this is called foraging) when in season and they bring back samples to the hive and do the “waggle dance”.  They waggle in the direction of the flowers and the time she waggles tells others how far away the forage is.  They stay harvesting the nectar until it runs out.  Lots of other insects pollinate too. Honeybees build up their numbers depending on the availability of the pollen.

Honeybee Nests/Hives: Skeps are the original basket hives but it is difficult to scrape out the honey from this type of hive.  Annabel showed us the traditional wooden hives and modern polystyrene hives which are light and insulated but are not hard and tough like the wooden ones.  There are also other types of hives.

Worker Bees: (Female) There are thousands of these female bees and they dictate what happens in the hive, their jobs are endless.

Drone bees: (Male) Not many jobs for these bees.

When Bee Keepers take the lid off the hives they see many honeybees.  By shaking the bees off they see the eggs in the centre, young and pupating larvae.  Around the edge is the pollen and around that the honey with a wax sealing.  The queen lays an egg which takes 12 days to emerge as a worker bee.

Producing Honey: In the winter the bees cluster in a group in the hive and change places inside to outside of the group to keep warm. Honeybees collect all different types of pollen and store it to feed baby bees.  They produce more honey than they can use.  The bees are left with the honey they need to over winter and then the Bee Keeper removes the excess.

Swarming: This happens April to June and is the way bees reproduce. They produce a new queen and when they swarm half of the colony goes taking the old queen with them leaving the new queen to develop the other colony.  The swarm is attracted to the queen by pheromones.  Scout bees are sent off to look for a new home.  Bee Keepers are alerted to the swarming bees by the public and collect them to form a new hive.

Threats to Honeybees: There are a number of threats but the main one is the Varroa mite.  They attach to the honeybee and pass on diseases.  They have been in this country for many years and the honeybee is starting to adapt to it.

Asian Hornet: These have been in this country for about five years but hey have not established themselves.  They are carnivores and prey mainly on honeybees taking the thorax of the honeybee back to its young.  It is bigger than a wasp and is very distinctive with dark sections on its body and yellow on its legs. There is an Asian Hornet Watch App and this helps with identification and to report sightings.

Annabel ended by encouraging us to help honeybees by planting bee friendly flowers. For more information visit www.rhs.org.uk or www.bbka.org.uk

Finally she encouraged us to take up a new hobby “Bee Keeping” and if we are interested to visit www.northsomersetbeekeepers.org where we will find out how to start.

This was a very enjoyable, informative and fascinating talk.