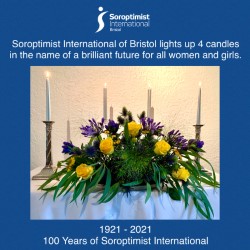 Leading up to the Soroptimist International 100 Celebrations, we were invited to take part in a “Candle Ceremony” submitting a picture and four wishes (pictured left). 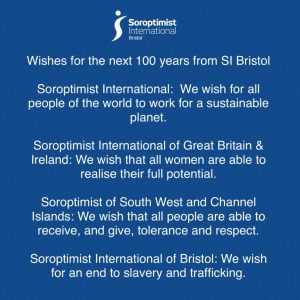 We joined many other clubs worldwide “lighting up the world in the name of a brilliant future”.

2nd October (5-8pm BST):  An introduction was followed by an illustrated history of Soroptimism. We were pleased that the parallel existence of Venture Clubs was mentioned as SI Bristol was the first Venture Club established in 1920 later to become a Soroptimist Club

Each of the five Federations described their achievements since the last Conference and their current projects.  Their impact on women and children globally, even during the coronavirus pandemic was impressive.  It was both eye-opening and eye-watering to hear the associated stories.

The United Nations Representatives were introduced and the vital role the play was summarised.

Peppered between these reports and keynote talks, were many short congratulatory video clips from individual members from around the world, each raising a glass, cup or lighting a candle – in keeping with their Club’s tradition.

Throughout the three hours there was a constant stream of chats from Soroptimists across the world – giving input and support.

3rd October (5-8pm BST):  There were many talks and congratulatory messages. Many projects were presented, including Limbs for Life (with Red Cross), Women’s Voice, Join Together, Women for Water, See Solar/Cook Solar, Restoring Dignity, Go with the Flow, Days for Girls, Educate to Lead and Road to Equality. Also, there was a thank you from Japan from help received from Soroptimists.  Local members were ‘on the ground’ while Agencies were still assessing the needs.

2nd and 3rd October (8-9pm BST):  Zoom breakout Rooms were organised with about 20 Soroptimists, from various parts of the globe, in each. Participants introduced themselves and then discussed the question:

What do you hope for our brilliant future?  Responses included:

Another concern that was discussed was the issue of membership.  Responses included: