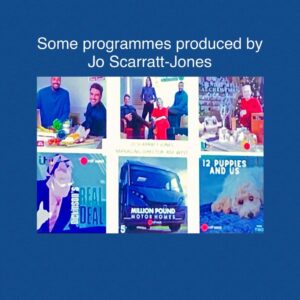 Jo started her talk by describing her work history and told us about some of the places she had worked and the exciting things she had done.

After leaving school Jo worked at the BBC.  However, at the age of 20 she thought she would change direction and join the Police Force.  Instead, they suggested that before becoming a Police Officer it would be a good idea to get other experience.

So, she worked for the Metropolitan Police at Scotland Yard in the Publicity Department.  She then changed direction again and worked in their Press Office.  It was a very exciting time.  In 1990 she reported on the London Pole Tax Riots and other similar events.  In 1991 she reported on the Downing Street Bombing and in 1993 worked on the Stephen Lawrence murder.

Then at the age of 27 her life changed, and she was head hunted to work for three months with ITV and stayed there for many years.  She said this was the best thing she had ever done.  She joined RDF about ten years ago as a Producer and she had become a skilled ideas person.  She was involved in setting up programmes such as “I’m A Celebrity Get Me Out of Here”, “LoveIsland” and lots of other similar programmes.  She said it was an amazing time.

Jo’s talk was very thought provoking, and we hope that we will be able to build on the information she gave us and use it as a way forward for our programme/project work.  Thank you Jo, for taking time out of your busy life to talk to us.