Members from around the Soroptimist International London Chilterns Region were joined for their Human Rights Day event on Saturday 10 December by guests and Soroptimists from other Regions around the London area. We received great feedback saying that people were impressed and we received many compliments about the quality and content from our speakers and the organisation of the whole morning on Zoom.

We were delighted to welcome two excellent speakers: 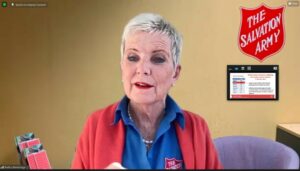 Our first speaker was Major Kathy Betteridge, Director for Anti Trafficking and Modern Slavery for The Salvation Army https://www.salvationarmy.org.uk/

Kathy Bettridge explained that is no surprise that the Salvation Army is providing support for modern day slaves because they have been committed to stopping slavery since the days of Florence and Bramwell Booth in 1885. They were also instrumental in raising the age of consent from age 13 to 16 in the UK. Sadly slavery is more 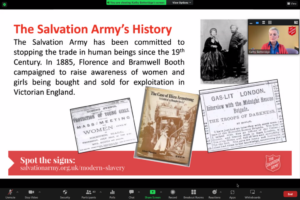 prolific now than ever before with an estimated 50 million enslaved people around the world – that is more than were taken from Africa during the 300 years of the transatlantic slave trade! Slavery is the 2nd largest criminal activity in the world after the illegal drugs trade.

The Salvation Army is the primary contactor with the UK government for victim support of modern slaves https://www.salvationarmy.org.uk/modern-slavery They provide intense support at the start then a lighter touch when the person moves on. They work with the police, identifying activity that leads to suspicion. Victims are taken by a 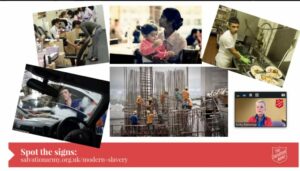 volunteer driver/chaperone to a safe house – often this is the first time the victim has received any care, friendliness or even a smile since they were enslaved. The driver often stops to buy them a meal and a drink on the way to the safe house. This network of volunteers are crucial in the first steps to recovery. First responders are not usually volunteers but the Salvation Army and other charities providing victim support for modern slaves do take on this role when they first take down a victim’s story. The story is then input to the NRM – National Referral Mechanism database and process. The responder needs to be skilled to get the story from the victim who will be frightened because they will have been threatened by the perpetrator and warned that they won’t be believed, that they will be in trouble with the police and will get sent home. Kathy advised us that if we see something suspicious that we should ring the helpline 0800 808 3733 or the police – we shouldn’t investigate ourselves because we may alert the perpetrators and make things worse for the victim. The 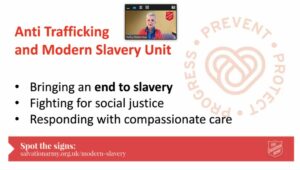 Government provides funding for the first part of the support because it is legislated, but an extra “Survivor Support Fund” pays for the practical help needed to rehabilitate victims. They have supported 18,000 victims since 2011. Figures for exploitation in 2021/22 breaks down to 1404 Labour, 715 Sexual, 600 Criminal, 241 Domestic Service, 145 Complex/Unknown. Source countries (in order) are Albania (top), UK, Eritrea, Vietnam, Sudan, India, Iran. British victims have doubled in the last year.

Kathy has many individual stories, making her presentation very real. She told us about an Albanian woman who married voluntarily but then her “husband” took her to Italy where he disappeared and she was forced into prostitution. It took her two years to escape. Another woman started singing through the support she got from the Salvation Army and that gave her confidence. A bus driver was able to help one victim who was escaping with no money – he allowed them to stay on the bus and took them to the police station. One student on a gap year had her passport taken, she was forced into sex work – she felt stupid so didn’t want to got to the police – every time someone offered to help her they turned out to be another abuser.

Traffickers target vulnerable individuals. London has the largest number of referrals. The challenges are finding accommodation for those who can’t return to their homes, resourcing ESOL classes, solicitors, dentists (sometimes teeth have been damaged badly through the violence of the perpetrators). Action we can take is to volunteer, know about welcome packs, sponsor a hub.

The National Health Service is not currently a first responder for modern slavery and Kathy would like that to happen. It would need Home Office sponsorship to ensure front-line healthworkers understand the signs and how to refer.

There wasn’t much time for questions following Kathy’s impressive presentation. Most attendees appeared not to be aware that the Salvation Army was at the forefront of this work. One Soroptimist was able to give us a first-hand example of being completely unaware of modern day slaves living in the house next door and how clever the perpetrators are at creating a friendly smoke-screen so as not to raise suspicion…..

Kathy Bettridge’s presentation will be here when it is available.

If anyone wants to make a donation to Kathy’s work with Anti Trafficking & Modern Slavery in the Salvation Army please email silondonchilterns@hotmail.com. She will be running the London Marathon this year in support of  the cause. The Region will also make a donation.

During the break we played this video of a song called “Orange” https://www.youtube.com/watch?v=mctGkB_HZRc

The song was written in 2021 for the Soroptimist Club Krems Fidelitas in Austria for the global Orange the World Campaign – 16 days of activism to end gender based violence from 25 Nov, the International Day for the Elimination of Violence against Women, to 10 Dec, Human Rights Day. 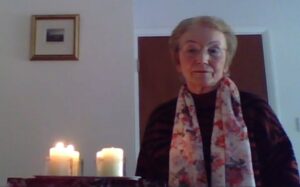 We then had four readings, after which Pam lit a candle: 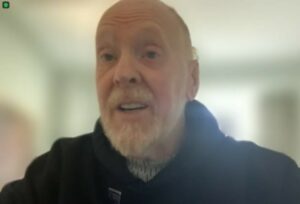 Chris has asked audiences to imagine a world without violence against women and what it would be like – asking them to describe it and people have used words like “loving”, “peaceful”, “safe”, “happy”. Who wouldn’t want to live in a world like that? What is stopping it? MEN!

What do men and boys need to do about this?

Chris quoted from a book by Bob Pease called “Facing Patriarchy” which is about disrupting men’s complicity. Men contribute to the culture and benefit from it. 90% of interpersonal violence is committed by men. Men need to be role models and do something about it then more men will follow.

Chris came across White Ribbon in Canada and founded it in the UK. After a slow start it looks like it is getting somewhere – last week he delivered seminars at Eton College, and he recently read an article in the Metro Newspaper in London “Why We’re Supporting White Ribbon”. 90% of the male population don’t realise they need to do something. 60,000 have pledged to do something but that is out of a population of 35 million men!

Chris then spoke about Male Allies Challenging Sexism (MACS) which he is keen to be “deeds not words” like the women’s suffrage movement. Why aren’t men doing more? Things are getting worse. A change in attitude and behaviour is needed – they have an anti-pornography campaign and an anti-trafficking campaign. Attitudes in the home to fatherhood, childcare, housework all need to change – most male organisations focused on ending violence against women don’t include this.  Chore-wars in the home created conflict. Women around the world do 85% of household chores – in the UK on average a man spends 69 mins a day on chores and a women 30 mins a day. We need to involved men in the conversation.

There was a discussion from attendees:  A wife was criticised for having a house husband because that meant she wasn’t doing her job as a wife…. We need men and boys to do jobs around the house without having to be reminded.  The campaign “Let Toys be Toys” was raised https://www.lettoysbetoys.org.uk/ challenging gender stereotypes for children. The UN Istanbul Convention on combating and ending violence against women has finally been ratified by the UK but it excludes migrant women. PSHE (personal, social, health and economic) education is now included in the school curriculum but should be in everything, not as an add on… Soroptimists need to follow up on PSHE having campaigned for it to be compulsory – is it covered by OFSTED?

If anyone wants to make a donation to Chris’s work with Male Allies Challenging Sexism https://menchallengingsexism.org.uk/ please email silondonchilterns@hotmail.com. The Region has made a donation.

NB please see below * for a wonderful accolade for the White Ribbon Campaign from Irene Cockroft, SI Greater London.

We ended the meeting on a high with news from Clubs on their projects supporting Ukraine and the Orange the World Campaign:

SI Thames Valley and Milton Keynes were busy on the day with “Orange The World” activities.

SI Hertford and St Albans joined together for Hertfordshire County Hall turning orange. SI St Albans had been busy oranging again this year – having received an award for ther project at the Belfast Conference.

SI Thames Valley are supporting Ukraine via the Krakow Club and Anna Wszelaczyńska (past European President).

SI High Wycombe gave an update on the Azalea project which provides practical support for vulnerable women in prostitution.

Our next SI London Chilterns Region Conference will be on Sat 11 Mar and will celebrate International Women’s Day – 10am to 4pm in person Lancaster Hall Hotel https://www.lancaster-hall-hotel.co.uk/ 35 Craven Terrace, London  W2 3ELM. More details will be available nearer the time.

What a great Human Rights Day event – there were lots of comments in the Zoom chat – “Thankyou S I London Chilterns for an excellent and thought provoking meeting” was one of many with a similar message. 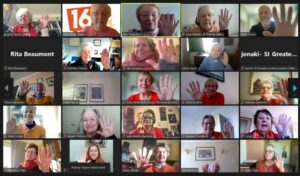 *This accolade for the White Ribbon Campaign is from Irene Cockroft, SI Greater London:

“One cold November in the past I was on my way to join “Reclaim the Night” women walkers in central London. At that time the press was stirring up controversy as it does, making out that strident women were emasculating men by demanding women’s rights.  As I passed by the statue of Nurse Edith Cavell at Trafalgar Square,  I was surprised to see a group of men with candles holding a vigil at the base of the statue.  I feel sure they were wearing white ribbons though the movement was not well know at that time.  I asked them why they were there.  They told me that, as Nurse Edith Cavell in World War One saved the lives of men in the armed forces, irrespective of nation, at the ultimate cost of her own life, they were there to support Reclaim the Night women walkers.   I cried. What all genders seem to need is kindly conversations that bridge the gaps in human understanding.”