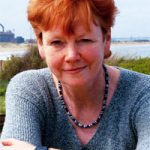 At our March meeting, Dame Vera gave feedback on our recent work on DA court observations.  Our reports have now all been submitted, and the debrief by Police is due on 22nd June 2020.

Soroptimists completed 200 questionnaires, representing 225 manhours worked.   Our region mustered 40 volunteers and carried out 70 observations.  Other regions are now becoming involved in the project.

Dame Vera then told us about developments in the Northumbria region.  As Victims Commissioner, her aim is to put the victim centre stage in what is an adversarial criminal justice system.  At present, the focus is on prosecuting or defending the defendant.

Victims of violent crime are often deeply traumatised by their role as a witness, but neglected once the trial is over.   Dame Vera sees her role as empowering victims to get the help they need.

One method of achieving this is by signposting victims to the various agencies that can support them.    Training Magistrates in DA awareness is also a vital part of making the legal process more victim-friendly.

Dame Vera is optimistic that progress is being made, but she feels that more remains to be done.  We Soroptimists will be central to delivering change in this area.