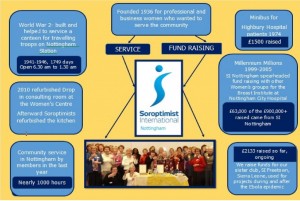 Over the decades the Soroptimist International club of Nottingham has helped women and families through voluntary work and also raising funds for charities.

After being established in March 1936, the first challenge was setting up and running with other volunteers a canteen on Nottingham Station for travelling troops from 1941 to 1945. Major fund raising projects over the years have included a minibus for long stay patients at Highbury Hospital in 1974, and in particular spearheading a Millennium Millions project with members and other Women’s Organizations, to raise money for the Breast Institute at the City Hospital in the late 1990’s.

Nottingham Soroptimists do not only fund raise.  Some of our project work involves encouraging local women in self-development. In 2005 we inaugurated the Awards for Nottingham Business women, at the other end of the scale we have run courses at the Women’s Centre to help women over the hurdles of getting back to work, training them in job applications and developing their CV’s etc. 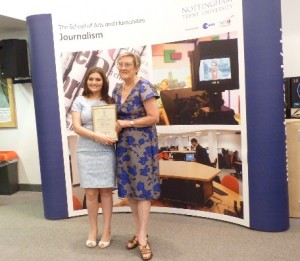 In recent years we have also funded a prize for students in the Centre for Broadcast Journalism at Nottingham Trent University for a third year project based on women’s issues in the media.  Budding journalists have submitted projects such as FGM, forced marriage, the stresses on young women in the fashion industry, and the problems of sex workers in Nottingham (Laura Hough the winner in 2014 pictured).

At the Women’s Centre in 2010 a drop in consultation room for WAIS (Women’s Aid Integrated Services) and the kitchen area have been refurbished by members, and members have helped in indexing the library at the Women’s Centre. We supply welcome packs twice a year and Christmas presents at Women’s refuges.

Internationally, over the years, many projects to help women overseas have been supported and currently funds are being raised for the Soroptimists in Freetown, Sierra Leone their own project to educate children orphaned by Ebola.

Locally, in the last year, members have carried out nearly 1000 hours of voluntary service, mainly in the Women’s Centre, the Contact Centre and liaison with the Women’s Refuges.

So what will be doing for the next 80 years?  There are still so many inequalities in women’s experience of life, even in a city such as Nottingham, there are plenty of projects still to be carried out.  Members of SI Nottingham are there to help.

Our newest member, Keira, who joined a few months ago, said why she had joined: “From the very first meeting, I was greeted with a warm and friendly buzz from the members at the Nottingham Soroptimists club. Being part of the Soroptimists makes me feel like I contribute to my local community. It is so rewarding to know that I help to make the lives of girls and women the world over, better. “

We all have very fond memories of Beth who was certainly a woman we really admired and looked up to.
She was a much loved, kind, generous, well-travelled and extremely knowledgeable person – a delight to know. Beth was a true Soroptimist, always welcoming new members and being a quiet mentor and support when needed to members who have known her longer.
Beth joined SI Nottingham in September 1971. Beth was therefore a member of the Nottingham club for 47 years-quite a record. Here she is receiving her 40 years of service Certificate, and that was in 2011!
Her Open Evenings were a regular event. Examples are a Twelfth Night Party and, last year, an Irish Halloween. Different to the current Halloweens, Beth’s evening had food and traditional stories.
.
However, one of the self-confessed interests that Beth had was in Soroptimism’s international aspects. This interest was expressed in working with Link Clubs, including visiting clubs and hostessing when other Clubs visited us. Beth always ‘adopted’ mature Nottingham University students and was our official liaison with the local United Nations office in Nottingham.
Members of the club will always remember Beth and hope to continue to have her optimism and interest in Soroptimism which never wavered.