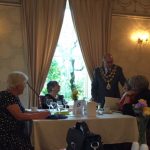 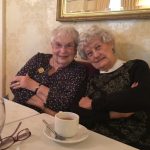 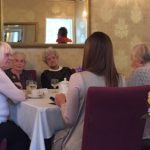 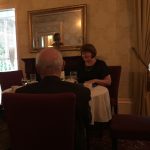 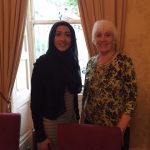 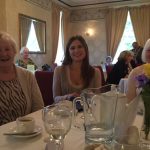 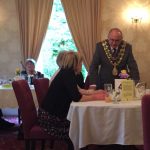 We held our 20th Charter Lunch at Sykeside Country House Hotel on 16 October 2016. Thirty two Soroptimists and guests gathered to enjoy great food and great company. President Alison Driver welcomed everyone to the event, highlighting that although SI Rossendale was celebrating it’s 20th Charter, there had been a Soroptimist presence in the Valley for 79 years. The Guest of Honour, The Worshipful The Mayor of Rossendale, Councillor Granville Morris thanked the members of SI Rossendale on behalf of Rossendale Council for the work that they did in the Rossendale Valley helping women and girls, he said that “their tireless efforts are received with the thanks of the Borough”.

The club’s hard work over the years was also recognised by the President of the North West and Isle of Man Soroptimist International, Margaret Hammond, who commended the club for its contribution to Soroptimist values.

The highlight of the lunch was provided by Rossendale Woman of the Year Leesa Amiin who shared her passion for her work, for Haslingden and for challenging herself and others, efforts that were instrumental in her being recognised as Rossendale Woman of the Year. Leesa’s personal story about her dreams and aspirations and the support she had received from her family to achieve them touched everyone. Club members assured Leesa that although they were greatly impressed with her personal achievement of eating two of the hottest chillies to raise £420 it was not a fund raising attempt that they would be copying anytime soon!