We had a pleasant surprise a couple of weeks ago when we received the news; ‘SI Rossendale Announced As Joint Winners Of The Darwen Shield 2020’.

We’ll be honest, it came a little bit out of the blue, as we didn’t even realise we were in the running. So, when the email arrived on 16th June 2020, we were a little bit pleased with ourselves!

Read on to find out more about the Darwen Shield and our event, This Girl’s Rising, for which we won.

Why Were SI Rossendale Announced As Joint Winners Of The Darwen Shield 2020?

The Darwen Shield is a programme action award, given in the North West England and Isle Of Man region of SIGBI.

The plaque has been made from the Darwen President’s chain and is awarded annually to the NW club with the most innovative and successful programme action, as decided by that year’s judges. 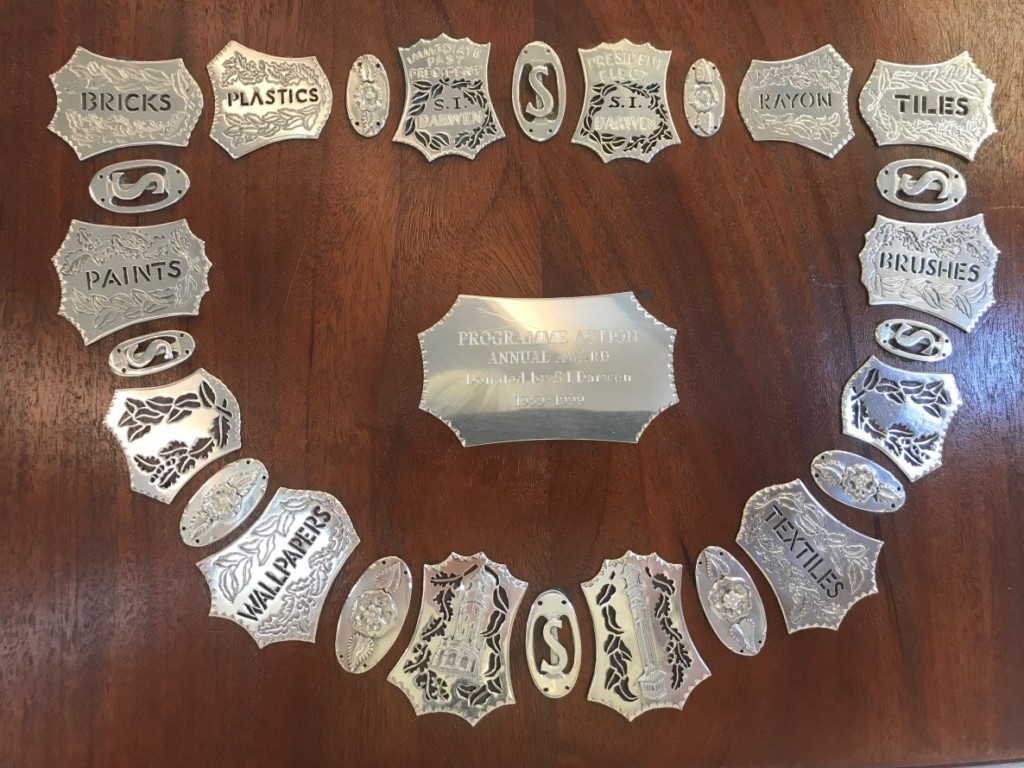 In June 2020, it was deemed that both SI Rossendale and SI Garstang had carried out equally brilliant programme action campaigns, and the awarded should be given jointly in recognition of this.

“The Darwen Shield for the best project this year [has been] jointly won by SI Garstang for the ‘Think Pink Sri Lanka Buy A Tuk Tuk’ project and SI Rossendale for ‘This Girl’s Rising’. Both projects were unanimously chosen by the team as outstanding, so the decision was made to make them joint winners. SI Garstang’s project to buy a Tuk Tuk was a fund-raising project but of amazing scale and breadth, focussed on women and girls, and involved all the club members. SI Rossendale’s ‘This Girl’s Rising’ was a service project with a difference, organising an evening to mark the International Day of the Girl Child, with invited women speakers  of different ages sharing difficulties they encountered in childhood and how they overcame them. Girls invited to the evening found it very inspiring.”

What Was The This Girl’s Rising Project?

As already mentioned, This Girl’s Rising was an event organised by SI Rossendale and held in 10th October 2019. The event was organised to mark the International Day Of The Girl Child, a UN day designed to give girls globally a better chance. 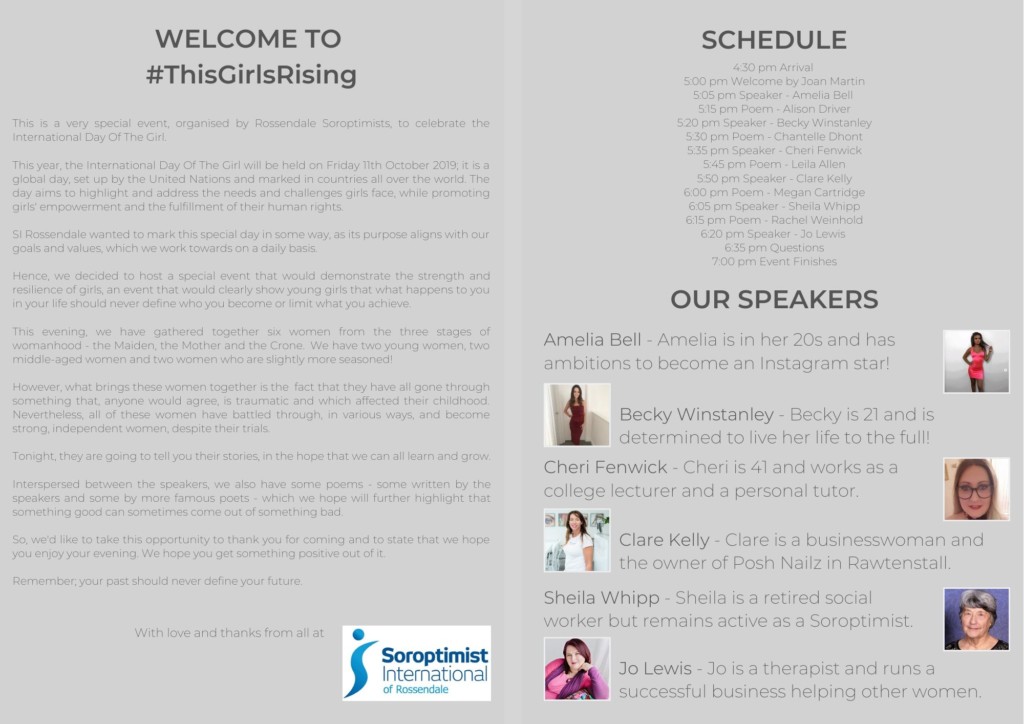 We invited 6 amazing women to speak at the event, all of whom had suffered some sort of adversity in their lives and had overcome it. Each woman had 10 minutes to speak about how they prevailed despite the obstacles put in their way, whether from illness, sexual abuse or a poor upbringing.

In between their inspirational stories we invited other women and girls to read poems so that, all in all, we had 10 amazing speakers, plus some members of SI Rossendale providing introductions.

To attend the event, we invited young girls involved with local organisations such as SafeSpace Rossendale, the M3 Project and Bacup Family Centre. All girls attended for free and, to make the evening even more enjoyable, we asked local businesses to donate prizes.

Every girl who attended left the event not only having been inspired, but with a goody bag packed with treats too. 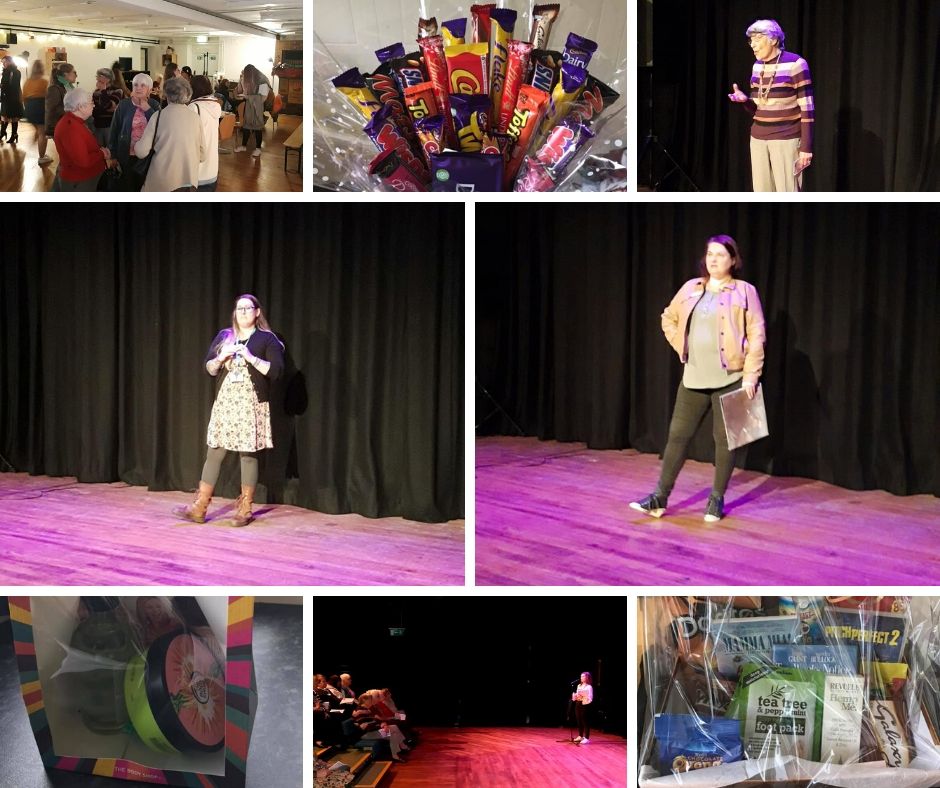 In total, the event attracted about 30 guests and the feedback we had about it was amazing. So much so that it’s likely we will do it – or something similar – again once lockdown is over. Whenever that might be!

Did You See SI Rossendale In The Paper?

We were so chuffed with our win that we managed to get our story in the Rossendale Free Press, courtesy of Catherine Smyth Media.

Catherine very kindly wrote us this amazing press release and it was featured in the paper w/c 6th July;

Naturally, there has been a lot of doom and gloom in the news lately, so everyone at SI Rossendale was really pleased to have received this award jointly for our efforts.

However, we couldn’t have done it alone, so we’d like to do some Oscar style thank yous, in recognition of those that worked with us.

First of all, thank you to everyone who came and spoke at the event; it can’t have been easy to stand up on stage in front of strangers and tell your story, so we appreciate your bravery and honesty.

We’d also like to thank everyone who attended the event; it would have been pointless without you and we’re so pleased you found it entertaining and educational.

Thanks must also go to The Boo, who allowed us to use their fabulous theatre free of charge. Your generosity made the event happen, so thank you. 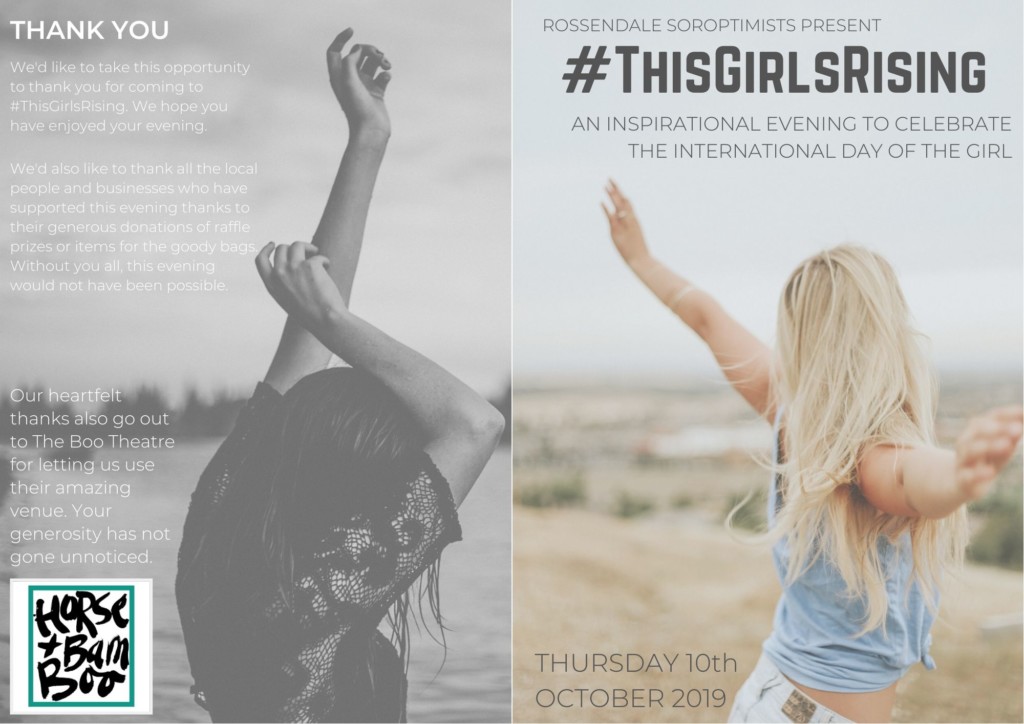 And finally, thank you to the judges for recognising the effort that went into the event and to Catherine Smyth Media for helping us spread the word.

Of course, we’d also like to congratulate our fabulous co-winners, SI Garstang. Your Tuk Tuk project was a worthy competitor and we’re thrilled that your hard work was recognised too.

Would You Like To Find Out More About SI Rossendale?

If you’d like to find out more about this event or other fundraising events that SI Rossendale is organising, then you can contact us using the Contact Form on the website. Alternatively, you can email directly at rachelweinhold@msn.com.