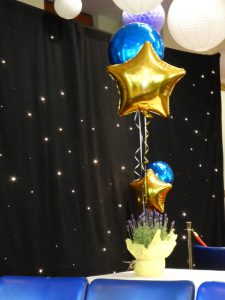 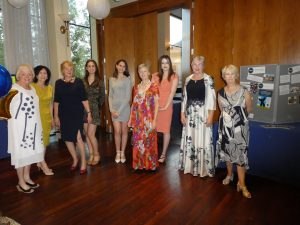 We had a very successful Fashion Show in May, raising over £1200 for ROTHACS. 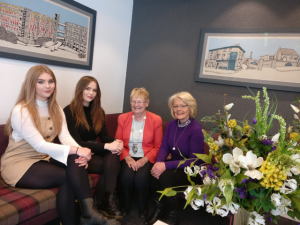 The four Sixth Form students who have been working with us this year have contributed really positively to the organisation of this year’s show, including appearing in the Star and on Radio Sheffield.  Thank you girls! 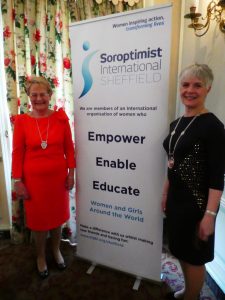 We were treated to a superb lunch at Hassop Hall to celebrate our 91st year,  As well as beautiful surroundings, lovely food and great company, we welcomed the Master and Mistress Cutler as our guests of honour, and also the president of SI Yorkshire and members from several other SI 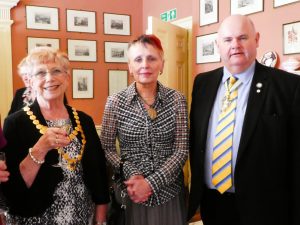 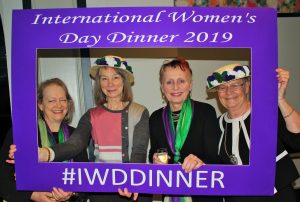 Two members of the club, Hilary and Ann H, attended an International Women’s Day dinner in Wakefield.  The guest speaker, Kim Leadbeater, is the sister of Jo Cox,the murdered MP.  She was inspirational, talking about the work promoting the sense of community done by the Jo Cox Foundation.
About 300 women attended, including several of the area’s MPs who joined us after the vote on Brexit held earlier that evening at Westminster. A message of good wishes for the Foundation was sent by the Speaker of the House.  A raffle and silent auction was held to raise money for the Foundation.  Yorkshire Soroptimists had a table and the photo shows some of us wearing our suffragette colours.

We held the inaugural steering meeting of club members to plan the campaign to make Sheffield a ‘Toilet Twinned’ city.
As many as 2.3 billion people in the world don’t have a loo.
Women and girls and children are particularly vulnerable to a lack of sanitation. 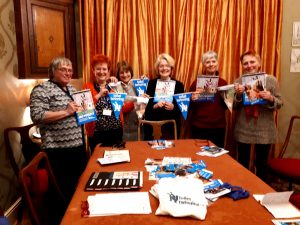 We were delighted to welcome Rebecca and Carol to our meeting this month.  The changes in the opportunities available to all within the Girlguiding movement were clearly explained and the activities looked most exciting and  appealing. 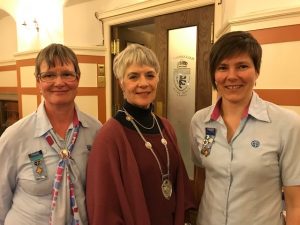 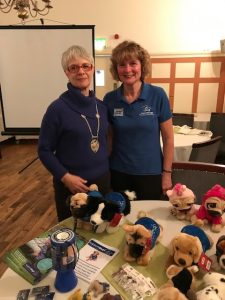 We were very pleased that Diane from Support Dogs attended our first Supper Meeting of 2019.  She gave an excellent, illustrated talk, telling us how their specially trained dogs can assist people with Epilepsy and specific disabilities, as well as helping children with ASD.  In addition, Diane told us of the many ways in which volunteers can help the charity. 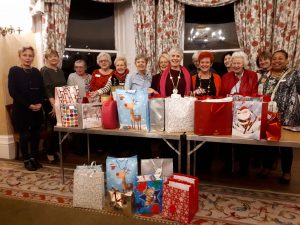 We have enjoyed putting Christmas bags together for the local women’s refuge, as well as collecting gifts for the Snowdrop Project.  Thank you to all members who contributed and to our Programme Action representatives for all their hard work in organising this.  HAPPY CHRISTMAS EVERYONE! 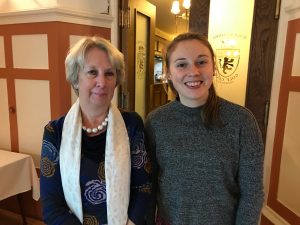 We were delighted to welcome Lucy from the British Red Cross to our meeting this month.  She told us about the work of this amazing organisation – both at home who suffered the loss of their homes through fire and required immediate support, to the wider role of the Red Cross in the world. 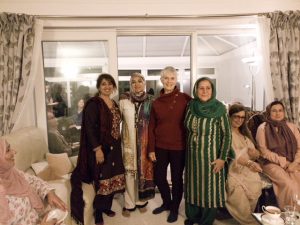 Members enjoyed a wonderful evening with super food and friendship.  We raised funds for SI Karachi – and have sent £739 which will help support the Skills Development Centre which they have set up. 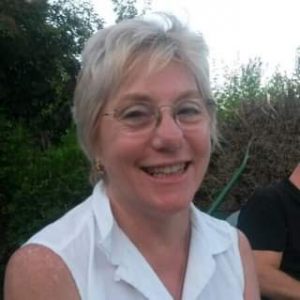 The SI Lower Hutt club is small but has a number of projects including supporting a local women’s refuge and ‘Fill the bus’, a homeless charity.  Recently, they gave an academic grant to Alison, a 45 year old Maori lady who is studying at the University of Wellington.   She spoke at our Christmas meal and was inspirational.  She left school with no qualifications; married young and had 5 children.  Her husband left them when the youngest was only 5.  She became a community police officer serving the Maori community and later went on to train as a police officer then worked in a very troubled area of Wellington.  Frustrated that all she seemed to do was be reactive to criminal activities, she wanted to do something to help prevent people becoming criminals, so she is studying criminology and law in the hope that she will be able to work in a more preventative role in the future. (The full text can be seen on our Club News Page) 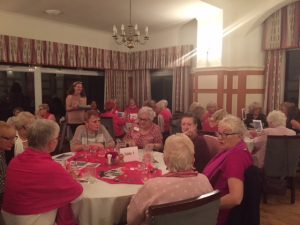 Our ‘Big Pink’ party, an evening of fun, food, friendship and a wee bit of fundraising too.  Our meal of chicken or salmon, with pretty pink desserts to follow, was delicious. Coffee and chocolates trimmed in pink completed the meal.  Amy from Breast Cancer Care and Julia from Tesco, did a great job of encouraging everyone to take a chance on the competitions,  and Jackie’s special pink tombola was very popular, whilst the auction  created a great buzz of excitement.  Although this event was not purely just about fundraising, a fantastic amount was raised and £725 has been forwarded to Breast Cancer Care in Sheffield.  A huge thank you to everyone for supporting this special event, which showcased Soroptimism at its best! 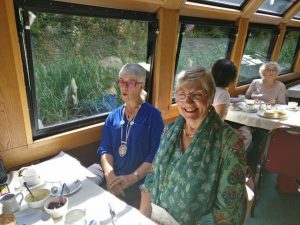 Last Tuesday many members were treated to a great cruise on the Sheffield Canal with a cream tea, as part of SI Sheffield’s 90th Birthday celebrations. 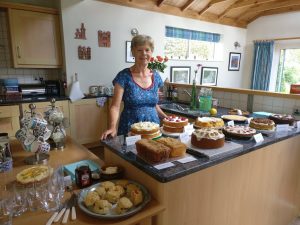 The sun shone and the cake was plentiful – what more does a garden party need?  Many thanks to Jane for hosting and to all members and friends who attended.  As well as having fun, money was raised for the Trussel Trust. 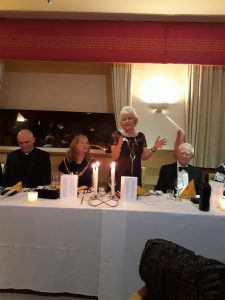 We launched the  celebrations of the 90th anniversary of SI Sheffield’s Charter in style with a black tie dinner at Baldwin’s Omega.  We were honored to be joined by the Lord Mayor, the Bishop of Sheffield and the Master and Mistress Cutler.  After a lovely dinner, which matched the Omega’s usual high standards, President Christine introduced our Guest Speaker.  Members and guests were able to look at our specially commissioned book, giving a visual history of much of the last 90 years of SI Sheffield and everyone was given a beautiful commemorative paperweight bearing a replica of SI Sheffield’s presidential badge. 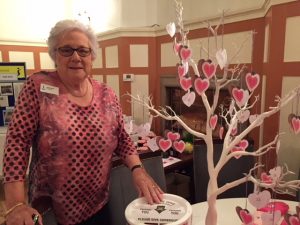 We were thrilled to award Jackie with Honorary Membership as part of our 90th Birthday celebrations.  As well as her ongoing amazing support for Pye Bank, Jackie has raised thousands for various charities through her stalls, which are regulars at all meetings and social activities.