In 2013 the club was involved in the nationwide Soroptimist project providing information on provision for women in local prisons and the justice system for the Prison Reform Trust.  The data was used in their report to the government for Reducing Women’s Imprisonment.

This led to us visiting the Nelson Trust in Gloucester, which provides support for women involved in the justice system.  Soon after we were delighted that the team lead was setting up a centre in Swindon.  We were keen to help the Swindon team in any way that we could and this started initially with donations of clothing for the women, many of whom had escaped violent relationships and had few belongings.

The Nelson Trust’s ultimate goal is to reduce re-offending and help women to become safe, confident and free from abuse, addiction and other dependencies.

The Swindon Centre has greatly expanded over the years. They now run a full timetable offering educational courses, workshops, drop-ins and groups – which cover well-being, life skills and creative activities.

The centre also has shower and clothes washing facilities, a crèche and a kitchen and the team run a weekly Lunch Club.

As well as more clothes Swindon Soroptimist have now contributed kitchen items, toiletries, towels, bedding and household items for use at the centre, and for women setting up in new homes. We also contribute food items for the Lunch club and food parcels for the women on a bi-monthly basis. 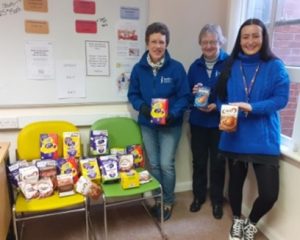 e have spent time helping sort storage rooms and every year at Easter give chocolates eggs and boxed chocolates for the women clients as well as the staff.

We have nominated the Centre as one of our yearly charities for 2 years running and have raised over £360 in funds for them. Some of this has been given already and used to fund three garden benches so they can create a restful outside area.

Our biggest contribution since 2015 however has been providing up to 25 Christmas gift shoe boxes every year for the women.

We try to make the gifts useful and fun, with items such as gloves, soap and shampoo as well as a Christmas gift, crackers and chocolate.

They are well received and as team lead Christina in 2018 stated “For many of the women this will be the only gift they receive this Christmas, so it will make a real difference to the women knowing that people out there do care.”

Our colourful member’s picture in  2019 was featured with an article in the Swindon Advertiser, as it has in many years.

Current Team Lead Vee says the women are already looking forward to Xmas 2020, a year in which the difficulties of Lockdown has made the boxes even more important. 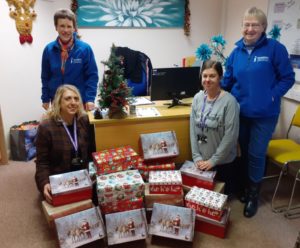 Go to club news for an update on recent club activity at Nelson Trust.