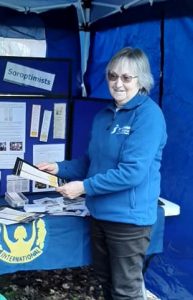 “When I joined in 1991 I did so because I wanted to help make a difference locally, nationally and internationally.

Over the last 30 years, I have helped out with many of our projects (see detail elsewhere on this website) and led 2 of them, giving interviews on Radio Wiltshire as part of my involvement with the latter.  I’ve been especially involved with the local Nelson Trust and Swindon Women’s Aid organisations and the Bookmark and Primary School Book projects.

I’ve filled several roles in Club over the years and enjoyed doing them.  I was Secretary of our South West & Channels Islands Region for 5 years; I was Conference Secretary for 2 Regional Conferences held in Swindon in the years when one of our Club members was Regional President.  I was also Conference Secretary and Exhibition Organiser for the 2010 National Federation Conference held in Manchester.  These roles all helped to extend me as a person, learning new skills and learning more about the plight of Women and Girls and what can be done to support them.

Over the years, I have attended Regional meetings during the year, plus the annual Conference.  Additionally, I’ve attended many of the National Federation Conference.  These are great occasions to network with like-minded women during the day and in the evening, as well as being able to visit some very interesting places in the UK and Malta (part of our Federation!).

I’ve made some very strong personal friendships at Club, Region and Federation level.  These have continued even though former Club members have moved to Edinburgh, Northern Ireland and elsewhere in the UK.

It’s a great organisation to join, whoever you are, with lots of opportunities.” 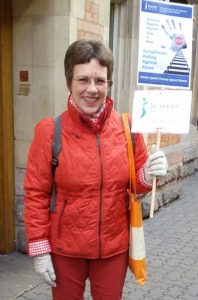 “I became a Soroptimist as I felt I had had a fairly privileged life and wanted to give something back to society.  I moved alone to Wiltshire and could immediately make friends with like-minded women and get to know local people and organisations, especially those we thought we could help.

We have fun together such as sourcing mini items for Xmas gift boxes or arranging a fund raising tea party, and it makes you feel good when you can see the difference it makes to the wellbeing of the women who receive the gifts.  But we make a difference on an international level as those funds might go to help train women in agriculture in Kenya and become self sufficient” 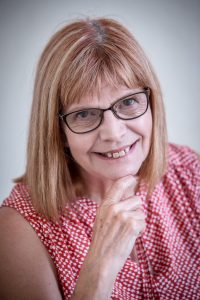 “I am passionate about empowering and helping people.  This passion is expressed in my work as a Personal Development Coach and Relationship Counsellor  and my volunteering roles.

For a number of years I was a Crisis Telephone Counsellor and ran Mindfulness sessions at a Rehab Treatment Center in Johannesburg, South Africa.

I was also Secretary and PRO officer of my local Rotary Club.

I returned to the UK in 2017 and pretty much had to re-start my life from scratch.  I had no friends or acquaintances, no home, no job or business.

Belonging to a community organisation both here in the UK and South Africa has helped me to meet new people,  often from diverse backgrounds that I wouldn’t ordinarily have come into contact with.   I have also stretched into doing new things and, through holding leadership roles has allowed me to grow and develop personally and in my business.

It has also given me the opportunity to make new friends and do what I love best, be involved in helping people both in my community and internationally.

I am a new member of Soroptimists and I look forward to getting to know the other members better and understanding the needs of women and girls in my community.”

“Being a Soroptimist has given me great insight to different aspects of lives, both in this country and abroad. We can easily become ‘safe’ in our own world and have no knowledge of the difficulties some communities have.

We have had talks from some inspiring young women that travelled around the globe.

Soroptimists have also given me some lovely friends, that have given me support in times of need.”