We were delighted to welcome the legendary Marion Christmas as our final speaker in the club year.  And what a finale!

Marion’s involvement in the Gambia started In 1989.  A Hampshire Scouts Expedition (which included Marion’s son, Paul) spent six weeks building classrooms at Soma and Jirof Schools in the Gambia. Two years later three scouts from the Gambia were sponsored to come to the UK to participate in an International Camp. For some of the time they stayed with the Christmas family.  Marion, in her capacity as Assistant Group Scout Leader for Second Bentley Scout Group asked the young men,

‘Of all the things you have seen here, what would you most like to have in the Gambia?’  She expected the usual teenager’s wishlist.

Marion’s response was ‘I’ll build you one’. She had never been to Africa, had never built anything. Her husband was horrified!

Some years later and true to her word, Marion raised enough money to buy land and materials to build Kairo Konka Lodge. 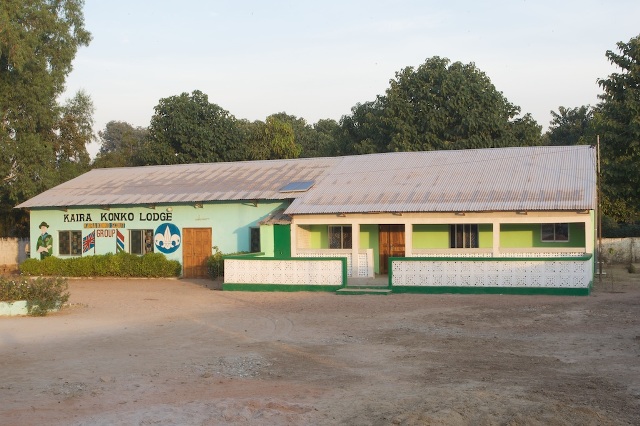 One of the Scouts who heard Marion pledge that she would build the Lodge was Lamin Jarjue. Marion recognised his potential. With the help of sponsorship Marion was able to enrol Lamin into Farnborough College of Technology to study accountancy. He not only graduated with flying colours but, like Marion herself, when on to be rewarded with an MBE for his services to the Gambia.

Marion did not rest on her laurels but embarked on another project – the rebuilding of Soma Lower Basic School.  She has powerful allies in the University of Winchester, Dame Mary Fagan, The Lord-Lieutenant of Hampshire, and Hampshire County Council, in spite of taking them to court over another issue!  There have been many other projects too. Knowing our particular interest in women, Marion talked about the many difficulties faced by women in the Gambia and this was well-illustrated by slides.

Marion referred in passing to her role as a magistrate and a different type of role in the BBC series The Village which was broadcast in the 1990s.  The series in 1995 featured Marion’s battle with Hampshire County Council on behalf of her son, Mark and all people with dyslexia.  She is also an Honorary Fellow of the University of Winchester.

Marion Christmas embodies all the attributes of a good Soroptimist – practical, courageous, open-minded and above all determined to change the world for the better – so it is not surprising that President Liz wound up the evening by inviting her to join SI Winchester!