At the Conference at the University of Winchester on Saturday 4 March, as part of the lead in to International Women’s Day, women from across Hampshire, Wiltshire, Dorset and Surrey gathered at the University of Winchester to learn from a line-up of speakers about how the lives of women and girls are being transformed locally, nationally and internationally.

The event threw a spotlight in the run up to International Women’s Day on some of the difficult issues faced by women and girls throughout society and how their lives are transformed and supported at all levels, by authorities, charities and groups like ours. There is always more to do and support of all kinds is needed; donations of items, volunteering activities and lobbying on issues. Following the conference a message was sent to the Parliamentary Under Secretary of State for Women, Equalities and Early Years to draw her attention to specific topics discussed on which action is required.

The event was opened by University Vice-Chancellor Professor Joy Carter, who told delegates how the University’s precursor institution was established to train teachers to teach the poor and that Winchester was the location of the first school for poor girls, in the building that is now The Bell public house in Cross Road.

Caroline Dinenage MP, Parliamentary Under Secretary of State for Women, Equalities and Early Years and Hampshire MP had sent a video message to the conference attenders. 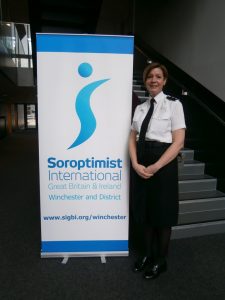 Chief Inspector Claire Taylor, Commander Winchester District, Hampshire Police focussed on the police response to the prevention and handling of cases of child sexual exploitation. She also spoke about how domestic abuse is dealt with by Hampshire Police and how survivors are safeguarded and protected.

Amanda Dukes DVA Co-ordinator of the You Trust organisation explained how women who have become victims of domestic abuse are supported, either in their own or a family member’s home, or found room in a refuge.

Jane Walker CEO of the Purple Communities Fund, described her own life story where as an abused child herself, she had determined to give something back to the community. She described her work as ‘giving back one of the ways we can grow as individuals’ and explained that trust is one of the first things that is lost in abusive situations.

Pauline Monk from the Purple Teardrop campaign described how she had been deeply affected by a presentation about trafficking and with other members of Soroptimist International of Poole, determined to take action to raise awareness of the trade and to support safe houses for survivors.

Suzie Ford of Team Rubicon UK described how Rubicon was founded in the USA in the wake of the Haiti earthquake by veteran US Marines wanting to do something substantial and concrete to help affected families. In 2015 a team of UK veterans worked alongside US colleagues to provide aid in remote regions of Nepal following the earthquake there and shortly afterwards Team Rubicon UK was formed.

Margaret Barnfield of SI Winchester described the work of the Winchester Club over recent years. She outlined a number of projects that local club members have developed including ‘Girls 4 Girls’ where local school students and girl guides have transformed recycled pillowcases into stylish but simple dresses to be sent to young girls in The Gambia

Ruth Healey, Regional President of Soroptimist International of Southern England brought the conference to a fitting close by putting in context the work done by clubs across the region. Over the past two years Southern England with less than 300 members had raised £40,000 and helped 4,400 women and girls.