Members of SI Winchester and members of the Salisbury Satellite Group met up to enjoy a visit to the exhibition at Portsmouth Dockyard which charts the history of women in the Royal Navy. 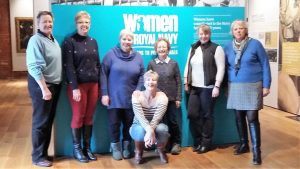 ‘Pioneers to Professionals: Women and the Royal Navy’ covers women’s involvement in the services from the seventeenth century onwards, during both world wars, the Cold War, integration and beyond, running right through to today’s serving personnel. 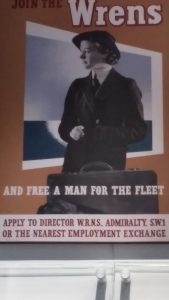 The WRNS formed in 1917. A uniformed women’s involvement in the Royal Navy directly confronted gender equality issues, which still profoundly affect us today. As such, this exhibition highlights women’s involvement and impact from WW1 right through to the continued efforts of female personnel today.

The objects in this exhibition illustrate the role of women in the Navy in the widest spectrum, ranging from a rare First World War Ratings uniform (only 5,500 women served during the 20 months the service operated in WW1) to an oboe owned by a member of the Royal Marine Band Service. Key issues for women in the Navy are also addressed, with objects such as a Naval Officer’s maternity dress indicating the key differences and concerns that women face whilst in service. 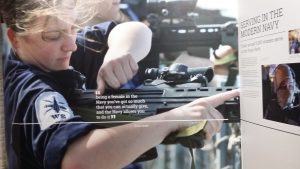