At our supper meeting on Monday 22 January we welcomed Nicky Jarman from the Goodall Foundation as our guest speaker. In October 2006, a 70 year-old English woman called Syliva Goodall, was travelling around a remote part of northern Tanzania. 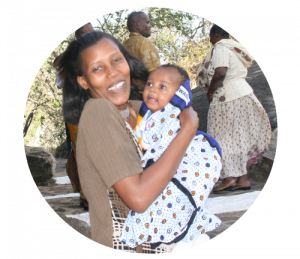 At a hotel, she bumped into a young Tanzania woman called Otilia and her baby son (left). They were both en route to different places, doing different things, leading very different lives. But their worlds connected at that moment, and they have been connected ever since.

Sylvia Goodall took a quick photograph of Otilia with her son. On returning to England, she sent a copy of the photograph to Otilia, and from there they struck up a friendship. Sylvia later returned to Tanzania with her son, Andrew. When they arrived in Otilia’s village, they discovered a barren school and a community with limited resources. Otilia and her family and her community never expected any help from these wazungo, but both Sylvia and Andrew, and their family, felt honoured to enable them to improve education resources for the children of the village and their teachers, and many other things besides.

Since then, foundation founder Andrew has supported several charities working to advance education and to connect people in the UK with people in this region of Tanzania. Andrew founded The Robin & Sylvia Goodall Foundation in 2016, in honour of his parents, in order to further the range—in terms of both geography and impact—of his philanthropic work.