‘Female health – where do we start? From conception to older age’

Jackie Porter is the County Councillor representing the Itchen Valley Division since 2005, representing residents, voluntary organisations and businesses in the area, and is the County’s Lib Dem spokesperson for children right across Hampshire. She is also Winchester City Councillor for the Worthys. Jackie is a school governor and a trustee of several different charities in the Winchester area. As well as sitting on the Council, Jackie is the non voting deputy on the Cabinet (Leisure Centre) Committee. She also serves on the Housing Appeals Committee and is a deputy on the Kings Barton Forum.

Jackie spoke to the Club on Monday 21 January about women’s health. She took us through the ‘Seven Ages of (Wo)Man’, spelling out the health issues associated with each stage of life and the care and support associated with each.  From conception, pregnancy and birth, right through maturity to old age and death, members were given a full understanding of what was provided for women through Public Health at County Council level and how that interfaces with the NHS and private health care providers. 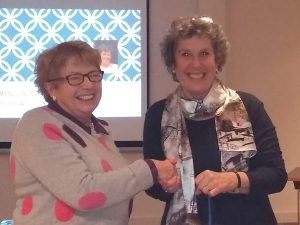 After taking many questions from the interested members and their guests, she was warmly thanked by Gina Bird (pictured here on the left).