However from April 2019 this will leave SI Winchester with reduced numbers. We have therefore embarked on a recruitment drive which we hope will make us more Winchester-centric.

On Friday 8March, International Women’s Day, we were able to set up a display stand in an area of the Hampshire County Council offices (in Winchester) known as The Street. This is an area close to the cafeteria where we were positioned from 12-2pm over lunchtime and were able to talk to quite a few ladies over this period.

It was interesting to learn how many commuters to Winchester work from these offices so we were able to spread the word about Solent East and Southampton clubs. Gina Bird and Julie Blackwell manned the stand to talk about the Winchester projects and SIGBI as a wider topic. We hoped that this created awareness of the organisation and our club in particular, it would have been too much to hope for to get any commitment at that time. 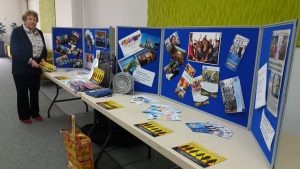 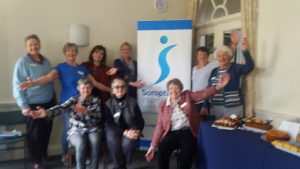 The following day 9 March we held a much publicised event (newspaper/posters/social media) in the Quaker meeting house with coffee and cake. The attendance was minimal but we took details of five ladies, two of whom have since been to a supper meeting. We hope to run this again later in the year, having learned that a higher profile venue would be better and to ensure we have a full campaign in action.