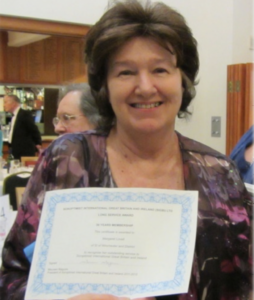 Margaret said that joining Soroptimist International was the best thing she had done in her life. She overcame personal challenges and in many respects the organisation was her family. She certainly embraced Soroptimism, whole heartedly.

She joined SI Cheltenham in 1980, moving to SI Portsmouth in 1982 and then SI Winchester in 2001. She twice served as President of SI Portsmouth 1985-6, 1999-2000 and as President of SI Winchester 2006-7. She served as Southern England Regional President 1991-1992. At Federation level, Margaret was Co-ordinator for Economic and Social Development on the UK Programme Action Committee. Throughout there was a plethora of sub-groups, committees and campaigns upon which she targeted her energies. Margaret’s professional role was Manager of Mediation Services, which required much hard work garnering funding for this essential service. 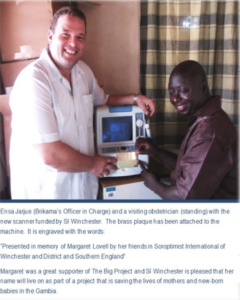 Margaret was kind, a great listener, determined and stubborn; qualities which made her an excellent Soroptomist. Notably, Margaret was a keen supporter of the BIG (Birthing in the Gambia) Project, driving  SI Winchester’s confidence in its ability to raise £10,000 to purchase a Scanner. Ultimately, the Scanner was installed in honour of Margaret. In the latter days of her cancer she continued to travel from Southsea to Winchester to contribute to meetings even though she could no longer drive.

Margaret had many interests. She was a consummate fan of trains and old buses and together with a friend was working to get a vintage car restored.

Margaret’s death was untimely because she was at the height of her contribution to many things and so many people. Reference to her energy still permeates the Winchester club.

The BIG Project: Working with MCAI, SIGBI’s BIG Project aimed to improve the management of emergencies during pregnancy, childbirth, infancy and childhood in The Gambia.