It is my humble pleasure to assume the president role at this time of the club’s 90th anniversary year. It is going to be a challenging year, as there are various changes within SIGBI and the implementation of Programme Action.

However, the club will continue to endeavour in its initiative, supporting 3E programmes in a variety of ways – locally, nationally and internationally.

During this year, I would like to see the club increase in number and retain the existing members. Although family and other commitments may not allow us to meet our target, we will try our best in this area.

I would like to see more involvement with other like-minded organisations to raise our profile and also work alongside educational institutions to empower and raise awareness among young people, especially in areas of gender inequalities and other social ills in society today.

In order to achieve this, the team effort of the club will be needed, as the success of any club is not that of the president but the joint input from all the members. I wish the club a fruitful and pleasant year. 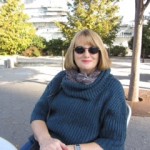 It is an absolute pleasure and honour to be President of Soroptimist International Aberdeen for the 2015-16 year. To be part of such a powerful and caring worldwide organisation of women who work so hard to improve the lives of women and girls throughout the world is truly a pleasure.

In Aberdeen we have a long history of working with the local community as well as highlighting issues relating to women and girls worldwide. This year I am very much looking forward to working with the members of Tillydrone Vision, a local charity who work with young people in Tillydrone and in Uganda.

“If civilisation is to advance at all in the future, it must be through the help of women, women freed of their political shackles, women with full power to work their will in society” (Emmeline Pankhurst) 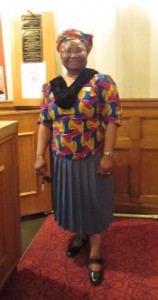 I became a Soroptimist in Nigeria. The Club admitted ladies over 35! and at the time I joined I was the youngest member! Zaria Club had many expatriates’ wives and as an educational town we had many female lecturers as members, of which I was one.

One of our major programmes was working with women with VVF, assisting with the correction of the ailment and rehabilitating them as best as we could. Most of the women were 12 and above! The oldest was 25 years old. Rehabilitating them was not an easy task as they also must be ready to move on. Fear of being alone and the community stigma was high! The Club worked with the hospital a lot and the Social work Services.

Another project was running an abandon babies home called “Berthory Home” established by an English Nurse, Matron Berth. She was tired of seeing babies abandoned on hospital corridors or in the Neonatal Ward. This project was a joint programme with the Rotary International. A 6-roomed bungalow was built with the assistance of NTC, Cotton Board and other Nigerian philanthropists. It’s still on going, unfortunately, as like-minded people started moving out this environment things went down hill. It lacks funding and proactive members to move the project on.

A meeting with Audrey Masson and Wilma at the Trinity Mall on one of the Service days surged a new awakening in me for Soroptomism and I was delighted to join the Aberdeen Soroptomists.

In this, S.I. Aberdeen’s 85th year, Audrey and Marion are delighted to serve the club as joint Presidents.

Our club is in good heart.
With President Sue at the helm, 2012 – 2013 was a tremendously successful year, where fundraising exceeded all expectations. We were delighted to be able to support Alzheimer Scotland and Famine Relief for Orphans in Malawi as our main charities, and also to gift our surplus funds to other deserving causes.

Our club contributes to the work of Soroptimists worldwide who aim to make a difference to the lives of women and girls globally. To this end, our members, who bring a wealth of skills and experience to our club, are actively engaged in lobbying on issues which they have identified as having an impact on women both locally and further afield.

This year, we hope to support a new local charity called Charlie House and to further reap the benefits which come with working in partnership with others and to developing our Friendship Links.

Being a member of Soroptimist International of Aberdeen brings with it the support of fellow members, perhaps never more so as in this past year.

We enjoy the camaraderie and friendship which comes from working together towards striving for international goodwill and understanding amongst women of the world.

We look forward to welcoming new members during this significant year for the club.

I was delighted to hand over the reins to Joint Presidents Marion Miller & Audrey Masson at the AGM in April. Having joint presidents is a new venture for SI Aberdeen and I wish them a successful year. I should like to thank each member for her support and friendship during my year of office.