Members enjoyed an interesting talk on zoom from Phil Pope from the charity Tools for Self-Reliance Cymru. This is an independent charity based in Crickhowell which collects old or unwanted tools from Wales, refurbishes them and sends them to Tanzania. 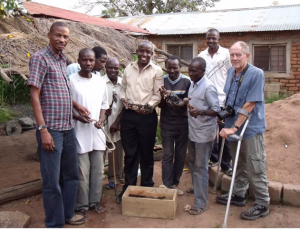 The tools vastly improve the livelihoods of carpenters, tailors, blacksmiths, mechanics, builders, shoe repairers, plumbers and many more. Sewing machines are most welcome at all times as they enable women to produce clothing and household furnishings for their families and also to sell on at markets. The women also work in the field with the equipment Tools for Self-Reliance provide. 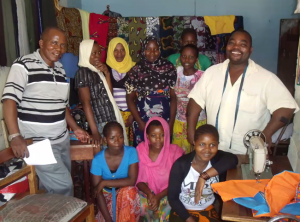 The organisation was started 35 years ago when a British student visited Tanzania. One evening, by chance, she encountered the Minister for the Interior for Tanzania, got chatting and between her love of the country and the Minister’s keenness to develop the lives of the locals, they decided to find a way to take action.

As well as a workshop in Crickhowell where tools are refurbished, the charity also operates a retail outlet. The proceeds from the shop help fund transportation costs which are considerable due to the heavy bulk of cargo – it can cost in the region of £8000 to ship a container from Southampton to East Africa! During lockdown the Crickhowell shop had to close temporarily, resulting in a significant loss of funds. However, rescue came in the form of a Welsh Government grant and an interest free loan, which coupled with soaring sales when restrictions were lifted, has put the organisation back in a positive position.

Soroptimists in this area have been providing sewing machines and fabrics to the charity for many years and Phil expressed his sincere gratitude for our involvement. As well as making a small financial donation to the charity, members plan to donate unwanted, rusty or broken tools. Joy Jay agreed to be the collecting point for forward transportation to Tools for Self-Reliance in Crickhowell. 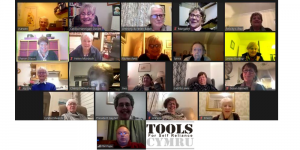 Further information is available at www.tfsrcymru.org.uk/