The memorial plaque commemorating Elizabeth Ralph’s extraordinary service to Bristol was replaced on Sunday June 25th 2017.  Julian Warren City Archivist and Susan Greenwood, who had discovered that the plaque was missing and then organised the replacement of the plaque, spoke at the event.  The group then had a very enjoyable celebration brunch at Lockside Restaurant, Cumberland Basin.

Amongst other things Julian said “In the winter of 1991 Miss Ralph planted the London Plane tree close to the city archives, donated by the Soroptimists International to mark her 80th Birthday.  A grainy photograph recording the ceremony was printed in the Bristol Record Office newsletter at the time which is currently on display in the search room foyer.  At the same time the city’s archives were moved out of the Council House and Bristol Record Office opened for business in B Bond warehouse, where the Archives continue to be based.

Miss Ralph was in fact the third City Archivist (all of whom were women) and the legacy her work as City Archivist over 34 years has had in securing historically vital collections relating to Bristol’s history – not just those of the Corporation, but many others including Cathedral and Parish collections, The Society of Merchant Venturers, and of course, the Soroptimists is remarkable. So, our thanks to Miss Ralph, to whom Bristol remains indebted”. 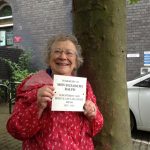 The first time Elizabeth Ralph(or “Elizabeth Regina” as she was known in some circles) spoke to me was some 30 years ago when, as a relatively new Soroptimist, I had to give the vote of thanks at the Annual Dinner.  As I sat down still shaking, she leant across the table and said “That was short and sweet Susan!” Well, that is how I shall continue.

Elizabeth never strayed far from Bristol although her roots were in Yorkshire.  Living with her mother and sister, she attended Fairfield Grammar School and became Archives Clerk to the Bristol City Council in 1937, rising to City Archivist in 1939.  I quote: “she organised things to perfection in an unobtrusive way and set herself, and others, standards which she expected to be met!”

As a Soroptimist she was twice President and was Secretary from 1940-1961.  Our Club benefiting greatly by her scholarly reputation and efficiency.  During the war she and her family were bombed out in Henleaze.  She helped with the running of No. 15 Upper Belgrave Road which was organised by the Soroptimists to provide a club for 300 service people and bed and breakfast for 70 service women each week for 3 years

On the archivist side during the bombing, she reputedly took charge of the city insignia and medieval swords storing them for safety in the Pier Railway Tunnel at Hotwells.  Her public offices were many including first female chairman of the Council of the Society of Archivists and General Secretary of the Bristol & Glos. Archaeological Society for 38 years as well as President.

Elizabeth was a truly remarkable lady and in the last five years of her life moved to St Monica being collected from her flat, full of books, to spend one day a week at the Records Office continuing with her researches right to the end.