On Thursday 28th June, SI Western-Super-Mare organised their 10th ‘Skirting Science’ where three helpers from SI Bristol (SIB) attended. For the second time, it was held at Churchill Academy and Sixth Form. The event was attended by nearly 240 year 9 girls from 15 area schools.

There were 14 workshops addressing various aspects of sc 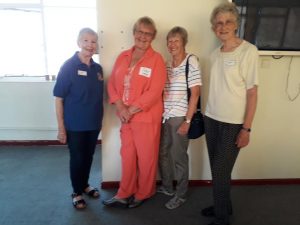 ience, including interpreting the showing how the five senses affect the way we taste food and drink; designing a cabin in an aircraft; using an infra-red camera to look at changes in temperature and how it can be applied in the real world; and interpreting the genetic code to make a ‘Pro-Bot’ from Lego and learning how the 100,000 Genomes Project is being used to identify rare genetic diseases. Each participant attended three workshops.

The event was supported by 25 volunteers from four Soroptimist Clubs (Weston-super-Mare, Bristol, Bath and Associate members from Bridgwater.  The Director of Programmes, from the Soroptimist Federation Management Board, Barbara Dixon, and the President of the South West & Channel   Island Soroptimists, Daphne Dowsing, attended the event.