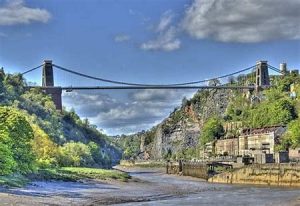 Mr Brewton quickly explained that although Brunel had submitted several designs for the bridge and his final design in 1831 was accepted, the Bristol Riots in that year meant that building never really got started.

It was not until after Brunel’s death in 1859 that two engineers John Hawkshaw and William Henry Barlow came along with extra knowledge and know how. They took over Brunel’s earlier designs and completed the building of the bridge in 1864. Although they changed the design they retained the two towers originally built by Brunel and 2 of the 3 sets of the original chains. The bridge is now owned by a charity and fees for crossing the bridge go towards maintenance. The vaults below consist of 12 caves.  For those visiting the caves you will see two of them and emphasis was placed on wearing warm clothes and stout shoes.