Following our Speaker Meeting on Monday’ on Thursday 11th October, 7 members of SI Bristol, one Soroptimister and a guest enjoyed a 2-hour tour of the spectacular grade one listed Clifton Suspension Bridge. 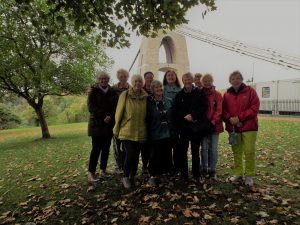 Gordon Young, our tour guide, was entertaining and informative; he illustrated many points with visuals from his satchel. We learnt the story of the bridge: about the competition to design the bridge and how the end result differed from the original design. Hardhats and hi-vis vests were donned before we climbed down a ladder to visit two of the twelve chambers inside the red sandstone abutment on the Leigh Woods side of the bridge.

The world famous bridge was initially designed by the Victorian engineer Isambard Kingdom Brunel, although he did not live to see his creation, which was finished in 1864. Work began in 1831, but the project was dogged with political and financial difficulties, and by 1843, with only the towers completed, the project was abandoned. Brunel died aged 53 in 1859, but William Henry Barlow, Sarah Guppy, and John Hawkshaw revised Brunel’s design and the Clifton Suspension Bridge was completed as his memory. Designed in the early 19th century for light horse drawn traffic, today it meets the demands of 21st century commuter with 11-12,000 vehicles crossing it every day. 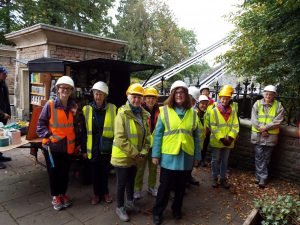 Although similar in size, the bridge towers are not identical: the Clifton tower has side cut-outs, the Leigh tower has more pointed arches atop a 110-foot (34 m) red sandstone-clad abutment. The abutment on the Clifton side of the bridge is three feet higher than on the Leigh Woods side, so that from a distance, the two appear to be the same height. Roller-mounted “saddles” at the top of each tower allow movement of the three independent wrought iron chains on each side when loads pass over the bridge. We observed how the bridge moved up and down about an inch when a car passed and were told it is designed to move half an inch from side to side. When we put our fingers in a gap between a bolt and one chain it was possible to feel the bridge’s ‘pulse’. Between the abutments, the bridge and chains span 703 feet and the chains sag a maximum of 70 feet – a perfect 10% that gives the suspension bridge maximum strength. The chains are anchored 50 feet below the surface of the road. The bridge roadway is suspended by 162 vertical wrought-iron rods in 81 matching pairs spaced evenly along the chains.

The second chamber we entered was vast and church-like in architecture and is based on the 1-2-3 principle. The walls were 9 to 10 feet thick, consisting of two walls 18 inches thick with the 6 to 7 feet gap between them, filled with rubble.

The Clifton Bridge Company initially managed the bridge under licence from a charitable trust. The trust subsequently purchased the company shares, completing this in 1949 and took over the running of the bridge using the income from tolls to pay for maintenance.