SI Bristol was well represented at The Regional Meeting in Taunton, where 8 of us attended. 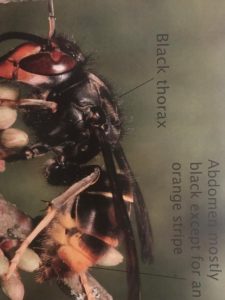 In the morning there were two speakers. The first Lynne Ingram told us about the Asian Hornets which are invading the UK. They are large black and orange wasps and are a significant threat to honey bees and if they get established they will have a devastating impact on our insect population. The nests have been spotted and destroyed but they will inevitably increase. It should be noted that European Hornets are native to the UK and are beneficial. If Asian Hornets are spotted there is an app to report the sighting AsianHornetWatch or report it at alertnonnative@ceh.ac.uk

The second speaker Camilla Hawley from “Safe Families for Children” spoke from the heart and told how they work with families to prevent children going into care. This organisation started in the North of England and has now expanded to the South West. They partner with Local Authorities and are mostly funded by the LAs and volunteers provide professional support to families. A video showing the sort of support families receive helped us to understand the importance of the service.

After lunch we were entertained and shown the delights of the SI Convention in Kuala Lumpur followed by the business agenda. To our delight Kay Turner, SI St Austell, entertained us with a “Soroptimist” song encouraging us to join in with the chorus, making it a very joyful end to the year.