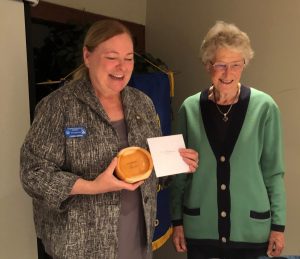 She was warmly welcomed by enthusiastic, interactive and diverse (in terms of both ethnicity and age) Club members. The meeting commenced with welcomes, introductions and a fundraiser ‘Sunshine’. An envelope was handed around so each member had an opportunity to brag or say something about what was going on in her life. The amount of the donation (from $1 to $20) was stated before the brag.

Marion gave a short talk about the first two decades of SI Bristol’s history, which was well received and generated much friendly discussion. This was followed by a talk about St Mary’s Center (www.stmarycenter.org) in Oakland. This centre provides breakfast, lunch, a shower and a bed to homeless people. Hooi, Marion’s friend who accompanied her, was moved to donate a microwave, stationery, and her time to cook lunches fortnightly.

At the end of the meeting, Marion gave Carol D of SI Oakland-TFC an engraved bowl that she had made 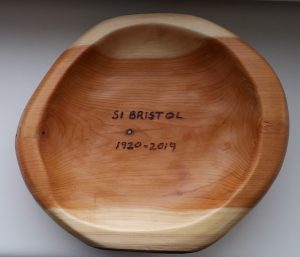 from yew and a card from President Denise. Carol D presented Marion with an SI Oakland backpack and notelets with a picture of an early meeting of their Club. The enjoyable evening concluded with everyone holding hands and reciting the SI of the Americas pledge.