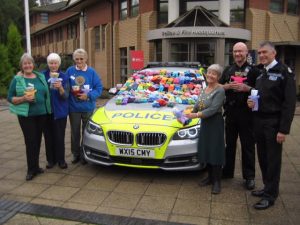 As part of its Centenary year celebrations, SI Bristol made a target to knit 100 teddy bears to be given to the Motorway Police for children involved in traffic accidents.

On 15th October, five SI Bristol members (Maureen [originator], Patti [knitter], Marion [President Elect], Denise [President], Anita [Organiser]) visited the Police Head Quarters in Portishead. They were met by the Chief Constable Marshall and Sergeant Sales, who made it clear that Teddies were a valuable tool for comforting a child involved in an accident. Interestingly, we learnt that the Teddies are not given to children involved in serious accidents, especially those involving fatalities, because of the risk of a long-term association of the teddy with the incident. However, they will be distributed between the Almondsbury, Bridgwater and Portishead police stations and the Avon Fire and Rescue Service. The Teddy bears were placed on the windscreen of a ‘Battenberg’ police car.