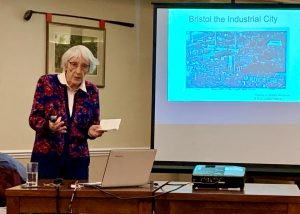 At our Supper Meeting on February 2nd we enjoyed listening to Shirley Hodgson, a retired headteacher talking about some of the hidden history of Bristol’s poorest children in Victorian times and the rise of Bristol’s Industrial Schools.

Shirley Hodgson herself devoted her working life to Bristol children, teaching in various schools. For ten years she was head of Victoria Park Junior School.

As the 19 century progressed there were organisations run by charitable and philanthropic individuals – often religious – which improved the lot of some. They would be taken in, fed, clothed and educated and taught skills to fit them for adulthood and work. These were mostly run by well-meaning people of whom Mary Carpenter was a leading light of the Reformatory School movement and founder of Red Lodge Reformatory School for Girls, as well as an Industrial School for boys at Park Row.

From the “ragged schools” of the early 19 century, Mary Carpenter and other social reformers realised that there was no point in teaching street urchins the three Rs for a few hours a day then sending them away to sleep on the streets again. They needed food, washing, decent clothes and a place to live.

Then came the “industrial schools” which did all these things and taught the children a trade, even if for the girls it was just being trained for domestic service.  Children taken into this system often got a better start in life than those from poor families which were more stable.

Industrial Schools, introduced under the Industrial Schools Act of 1857, could receive children aged from seven to fifteen years who were convicted of vagrancy and given a custodial sentence. Unlike Reformatories, the inmates of Industrial Schools were not required to spend an initial short period in prison after being sentenced.

The story of our city’s poor children is a shocking tale of neglect, poverty and workhouses.  Shirley spent 15 years uncovering the history of Bristol’s poorest children.