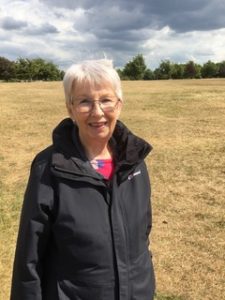 Soroptimist International is almost 100 years old and is celebrating the lives and contributions of  members who have made a difference. We are proud of Sue Perry who has been chosen as one of some hundred members who are being celebrated.  Below are some of Sue’s achievements.

At national level, Sue was a member of the FMB Membership Committee (2003-2004) and a member of the FMB Extension Committee (2004-2007). She was Chair of the SIGBI Manchester Conference Committee (2007-2010) and instrumental in its organisation. Sue was elected to the Board of 63 Bayswater Road for two terms of three years (2008-2014), its Chair (2013-2014) and co-opted to the Board for the 2014-2015 year. During this time, Sue was particularly involved in Human Resources matters, including the introduction of Contracts of Employment for all members of staff. She also worked closely with Ann Garvie in the refurbishment of the dining room and the much-needed installation of a new li^ – a major 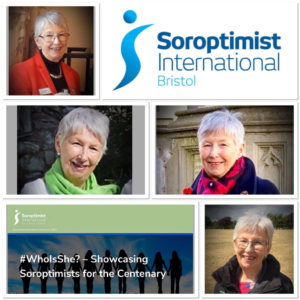 improvement, undertaken without closing the hotel.

Sue has consistently supported numerous local charity events to help the underprivileged, especially women and girls, throughout Bristol. She was instrumental in introducing SI Bristol to the valuable work done by Mary’s Meals, which the Club has since supported. She enthusiastically supports SI Weston super Mare with their Skirting Science and Railing Against Abuse initiatives and SI Taunton with their Skirting Science project. From 2017 to date, Sue has served as Minutes Secretary for SI Bristol.

In addition to her many contributions to Soroptimism, Sue supported Abbeyfield Society for over 40 years. She started as a volunteer with the Bristol Society in the 1970s became Treasurer of two houses and was then appointed its first paid Director of the Bristol Society. She is currently a volunteer Assessor for the Abbeyfield Quality Standard. Sue is active at All Saints Church, Clifton and an elected member of its Parochial Church Council. She was the Chair of the 150th Anniversary Committee and as the Vicar, Charles Sutton, says, “Sue’s involvement in so many activities was outstanding – not only in the 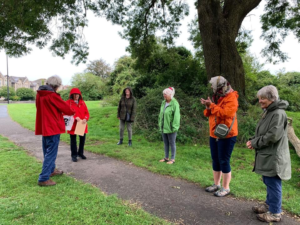 arranging and thinking but also in the doing and making things work.” Sue was a Governor of Redland High School, Bristol for over 20 years and the Deputy Chair of Governors during the merger of Redland High School and Red Maids’ School. She serves on the Old Girl’s Guild Committee and supports activities to raise funds for the school. In addition, Sue has been a Trustee of Young Bristol, Off the Record and of Age UK Bristol.

Sue Perry’s commitment to the Soroptimist movement has been above and beyond the norm. She remains an active member of the Bristol Club. She epitomises the essentials of unselfish volunteering and helping others.  Some of us were able to congratulate Sue ,social distancing, on our weekly walk on Bristol Downs