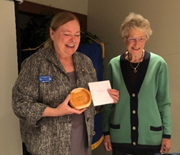 Somewhat unusual for the early 1920s, the Founder Presidents had received a high level of education and had careers in education. Miss Eleanor Addison Phillips in Bristol, taught history and sports. Miss Violet Richardson in Oakland taught physical education and health. They were humanitarians and known for treating all their students with dignity and respect, seeking to bring out the best of each one of them. They were also keen walkers.

Both Eleanor and Violet were approached by contemporaries to preside over their respective clubs. With their indomitable energy and spirit, they were the principal forces to foster the ideal of service by women and led other exceptional business and professional women to focus on service not social. Eleanor and Violet were instrumental in the formation of Associations of their respective movements.

Similarities between the Clubs

The inception of both clubs occurred in cafés: The Palm Court in Bristol and the Venus Café in Oakland. Both Clubs were encouraged and supported by Rotarians and were told that Rotary Clubs did not permit female members, they could not use ‘Rotary’ in their Club name but they could follow Rotary principles. Thus, each member held a specific and unique classification and members of many different professions or roles contributed to Club.

In both Clubs, meetings were initially held weekly, most of which featured speakers—either members speaking on their own professions or individuals from the community, including Rotarians. Both Clubs designed simple logos.

Differences between the Founder Presidents

A notable difference is that Violet insisting that members called each other by their first name “in order to start to break the stifling bonds of 1920s formality and inequality”. In Bristol, the Club used title and surnames until 1973 when the President, Miss Margaret Ball, announced that “use of first names would be permitted”. Her justification was that “many other organisations were now doing this.”

Differences between the Clubs

The Club in Bristol was initially called The Venture Club to embody its spirit. The Club in Oakland was called the Soroptimist Club – the first Club to use that name; hence their tag-line The Founder Club.

Although service was key for both Clubs, the type of their first project differed. The Bristol Venture Club focussed on humanitarian by matching members with motherless girls in a “Little Sisters” project and ran toy drives for sick children. These were so successful that they ran for 15 years. The Oakland Soroptimist Club focussed on nature by running a public awareness campaign to help save the redwoods in northern California.

Similarities between the Clubs triggered their amalgamation

By spring 1929, the Venture and Soroptimist movements finally became aware not only of each other’s existence but also the similarities of their purposes. The two groups investigated the possibility of merging and after considerable discussion, it was agreed to amalgamate: “to unite and work together for the ideals of fellowship

and service was finer and more in keeping with their aims than to strive in competition.”

In June 1930, representatives from Venture clubs (10 Clubs, all in UK) Soroptimist Clubs (53 Clubs from 10 countries) attended the meeting in London. The name Soroptimist was agreed upon, mainly because in some countries it was sanctioned by Act or Charter and thus difficult to alter. However, the spirit of Venture Clubs was not lost. Both the Soroptimist International Association and the British Union of Soroptimist Clubs (later SIGBI Federation) incorporated Venture’s motto of “Looking Further” into their emblem.

Bristol Club’s emblem after the merger, when ’Soroptimist Club’ was added.

In the 1930s, a Soroptimist had to be high up in a profession or business. Thus, young women did not qualify. However, in North America, Soroptimist Clubs encouraged younger women by helping them form affiliated Clubs, which operated under the name Venture. The name was chosen to pay honour to the British Venture Clubs and to perpetuate the name. These younger women assisted the Soroptimists in community service efforts, which in turn, helped in their professional development.

Getting closer, keeping in touch

Remarkably, it took almost a century before a Friendship Link was formed between SI Bristol (the first service club) and SI Oakland–The Founder Club. This happened in 2019 and we look forward to keeping in touch. Wouldn’t it be fun if the two Clubs could develop a shared project?

A member from each Club at a meeting in Oakland.

We are grateful to Carol Dippel (SI Oakland-The Founder Club) and Lisa Mangiafico (SI of the Americas) for their interest in SI Bristol and for sharing information.