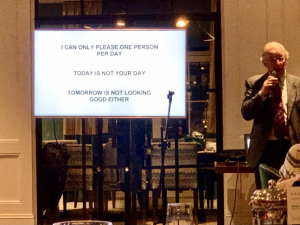 Sir Peter first described the definition of funny “Funny Medical and Nursing staff and what people get up to”.  He asked “does medicine need to be funny”?

He showed photographs of St Bartholomew’s Hospital London where he trained and photographs of the Professors who taught him.  He told us how they used rhymes to remember things such as parts of the anatomy and described how different from now it was then on the wards at Christmas and the fun they had carving the turkey.  He also described the fun they had with eminent people.

He said it was important to have something to keep up the morale of staff when disasters happened such as the bombings of Old Bailey and Tower of London.  There were lots of anecdotes about how things were done and the fun they had too.  He also showed letters sent to patients where words could be misunderstood.  He went on to talk about events that had happened when he was working abroad and ended by talking about today’s anaesthetics – laughing gas and Propofal.

Thank you for taking the time to share your experiences with us.