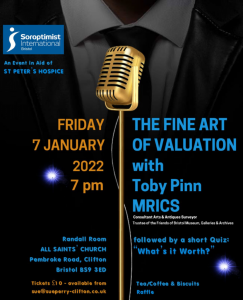 Toby is not a stranger to SI Bristol and he started by reminding us that the last time he came to talk to us it was snowing hard, and we wondered if we would all get home safely.  This time we were threatened by the rain!

He told us that he was the third generation of the family to be in the antiques trade.  His grandfather started the trend, he was originally a fishmonger and started his day incredibly early and saw antique sellers starting their day so much later.  So he sold his fish shop and moved quickly into the antiques market.  First in Luton then soon moving to Suffolk where people queued up to purchase goods even before he got them out of the van. Toby accompanied his grandfather and uncles and at an early age took an interest in antiques.  He studied at Southampton University and has a first class honours degree in Fine Arts Valuation.  Within 18 months of leaving University, he started work at Clevedon Salerooms and was there for many years.  Now in his current business he focusses on things he really enjoys, such as valuing single items or whole houses.  He said, “the challenge is to go into a modest looking house and finding that gem.”

He talked about valuations and six things that can affect the value: Age, condition, provenance, rarity, material and fashion, fashion overrides everything.

He then showed us some of the articles he had brought along, and we had fun guessing the value of some of the items. There was further discussion on the value of the items and why some looked authentic but were fake and why some which we thought would be of high value sold for a few pounds whilst others were sold for thousands of pounds.  He showed us a Hogarth painting that sold for £30 and Banksy painting which sold for £9000.  He also showed us some ivory and reminded us that legislation in this country (depending on the age of the ivory and if it is fully worked) effects the owning and selling of ivory.

Although being “covid safe” was high on our agenda it didn’t spoil our evening which ended with cakes and coffee.  Many thanks to those who helped to raise money for St Peter’s Hospice and also for making our evening very enjoyable and such fun.