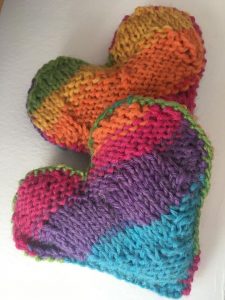 The talk reviewed a number of festivals, revealing that prehistorically they were based on survival, farming and nature. Later they were based on religion and Christianity and more recently focused on community, human life and family, of which Valentine’s Day and Mother’s Day were given as examples.

While the origin of ‘Valentine’ is not known, Chaucer recorded that 14th February was the day birds chose their mate. Initially, recipients were loved ones but also could be by pulling a name or even the first person they met on that morning! By the 18th century the favoured token was a letter or card.  In the 1840s, commercial cards became available. By 1914, after cards had become increasingly rude, the practice nearly faded out. In the 1950s, the sending of cards to a loved one on Valentine’s Day was reintroduced by the USA.  Interestingly 15th of February was also a noticeable date as it was celebrated as “The Feast of the Wolves” and the men, wearing nothing but a jockstrap, ran around creating havoc!

Mother’s Day first started in the north and west of the UK, with Bristol being in the centre. On the second Sunday of Lent servants were given the day off work to visit their mothers, often taking a simnel cake. By the 1930’s when servants were less common, the tradition faded. It was revived in the USA (on the 2nd Sunday in May) and in the 1950’s was resurrected in the UK (2nd Sunday of Lent).