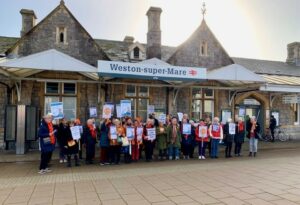 On Friday 25th November SI Weston-super-Mare yet again organised the “Railing Against Abuse” event to raise awareness and support the United Nations (UN) Day for “the Elimination of Violence Against Women”.

Seven members from SI Bristol and Soroptimists from throughout the southwest (Bath, Bristol, Plymouth, St Austell and Tiverton) travelled by train (“railing”) to join this annual 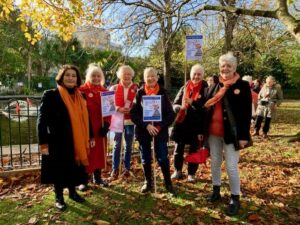 Most wore distinctive orange clothing because that is the colour designated by the UN for that day. The group walked in an orderly fashion from the train station to Grove Park. Many carried banners highlighting abuse against women. As they walked, they handed out “Loves me /Loves me not” bookmarks to members of the public. This publicity material pointed out in clear and simple terms the difference between a good relationship and a bad one.

The group included other interested people and there were over seventy people there.  They congregated on the band stand where they were addressed by Melanie David one of the key organisers from SI Weston-super-Mare, Councillor Mark Canniford, Executive Member for Economy and Community Safety, John Penrose the MP for Weston-super-Mare and finally the Lord Mayor Sonia Russe.  They all had the same message that violence should be eliminated.

Orange ribbons, representing the number of women in England and Wales who are killed each year by men known to them, were tied onto railings around the pond. Also ribbons of other colours for other people who are abused by people known to them.

We then went to the Commemorative Garden, where in 2018 the bust of a woman was unveiled.  The bust, which had been made by a member of SI Weston-super-Mare, was entitled “Enigmatic Smile”.  We were then addressed by other interested parties and finally listened to a poem about someone who had been abused, a moving way to end the day.