The 16-day period from 25th November to10th December each year is used to highlight gender-based violence.  

The International Day for the Elimination of Violence Against Women is marked every year around the world on 25th November, and is followed by 16 Days of Activism which ends on Human Rights Day on 10th December; a campaign to end gender-based violence and raise awareness that women are subjected to rape, domestic violence and other forms of violence, which is often hidden.

The 25th November is also designated ‘Orange the World’ Day and is led by the United Nations. The colour orange has been chosen by the UNiTE Campaign as a bright and optimistic colour, representing a future free from violence.

The campaign started on 25th November at Chester Suspension Queen’s Park Bridge, which was decorated with orange bows and a display of messages. At 1pm orange petals were thrown into the river from the bridge to remember women killed by domestic violence. 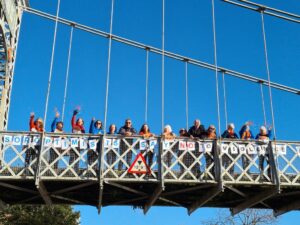 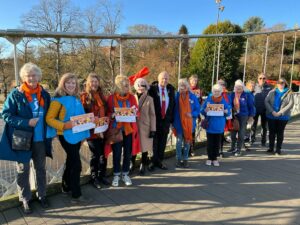 SI members visited shops on Eastgate Street asking them to display a poster in their windows during the 16 days to support our campaign to end violence against women; and to add an orange item from their stock to make an eye-catching window display.

From 11am on 27th November, SI Chester members were on Eastgate Street with a Shoe Installation. 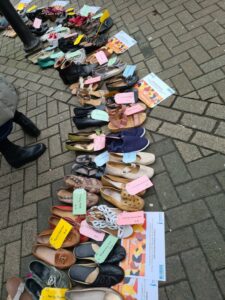 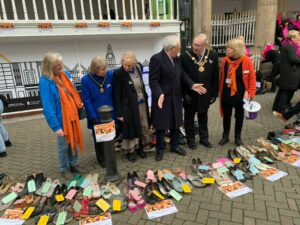 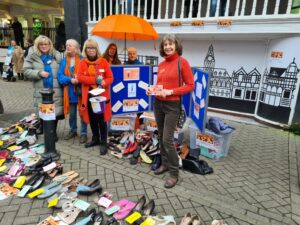 The display represented women killed by men in the UK in 2020, using data from the Femicide Census. 79 pairs of shoes were labelled with the names of women killed in 2020.

Choirs, Father Christmas, the vice Dean of Chester Cathedral, Cheshire Police, the Fire Service, the Mayor, dancers and a drum group all supported the day.