S I Derby members lay wreath at the Menin Gate

We received an invitation from our friendship link, Soroptimist International Kortrijk in Belgium, to visit Ypres (Ieper), where Kortrijk members were laying a wreath at the Menin Gate to commemorate the outbreak of the First World War. Four members from Derby, Janet Stopher-Clark, Liz Hurfurt, Anne Brawn and Judy Doenhoff, spent the weekend of 22-24 August near Ypres taking with them a poppy wreath. During their time there they visited the newly refurbished Passchendale Memorial Museum, the British and Commonwealth Cemetery at Tyne Cot, the German War Cemetery at Langemark and the Flanders Field Museum in Ypres.

The moving ceremony at the Menin Gate takes place at precisely 8.00pm every evening and has done since 2 July 1928 except for a break during the Second World War. Four volunteer buglers from the Fire Service play the Last Post, Laurence Binyyon’s “They shall not grow old…..” is read, wreaths are laid and the Reveille sounded. On the evening of 24 August, 4 Soroptimists from Kortrijk and the four Soroptimists from Derby took their places amongst those laying wreaths. The wreath from Derby was dedicated to the women who lost their lives on the Western Front. Anne Brawn laid the wreath for Derby and SI Kortrijk’s was laid by their president Ann Cousee. 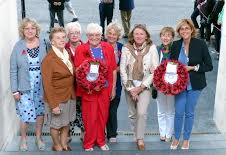 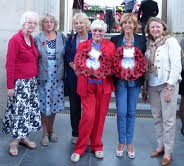 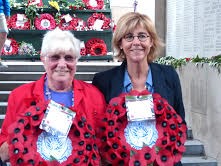